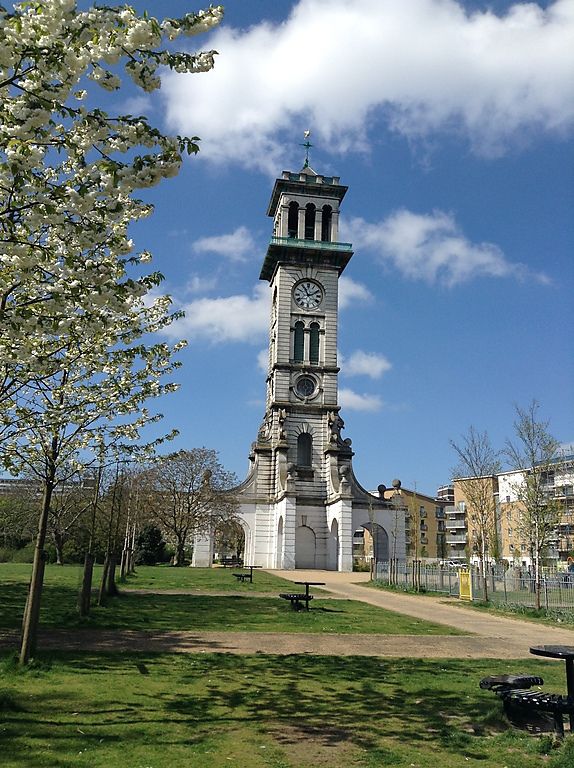 29/09/72
GV
II*
Built as the clock tower of the Caledonian Market. 1855. By James Bunstone Bunning, Architect and Surveyor to the Corporation of the City of London. Portland stone, with ornament of cast iron, roof of slate.

The tower is square in plan with five stages, the first two wholly decorated with banded rustication, the third and fourth partly so. Two round arches project from each of the four sides, those on the south projecting southwards, and so on; they have keystones and are flanked by a rusticated pier on the tower side and a rusticated anta on the outer side; their cornice continues that of the first stage of the tower and there is a ball finial to the anta; a concave buttress sweeps up from each finial, rather in the manner of an inverted console, and meets a continuation of the inner pier; both are crowned by a ribbed cornice and bold double consoles.

The tower proper has a round-arched entrance to the south set under a round arch with a keystone; there are round arches to the other sides, now blocked (above this level the features are identical on all four sides); plain moulded cornice; round-arched windows to the second stage with ribbed sill and keystone, and original glazing now partly obscured on all sides; ribbed cornice; keyed oculus to third stage; ribbed cornice; the fourth stage has paired, round-arched, louvred openings with entablature, panelled spandrels and keystone below a clock face with panelled spandrels; the clock by John Morris of Clerkenwell, 1856; the whole of the third and fourth stages set under a round arch of rustication; ribbed cornice; the fifth stage has a balcony with elaborate cast-iron brackets and railings and is arcaded, with three round arches to all four sides forming a belvedere which acted as a bell-chamber, the arches having entablature, keystone and panelled spandrels; panelled frieze; deep bracketed cornice; parapet with stone piers and rail, and cast-iron balustrade; pyramidal roof with iron weather vane.