A Grade I Listed Building in Bromyard, Herefordshire, 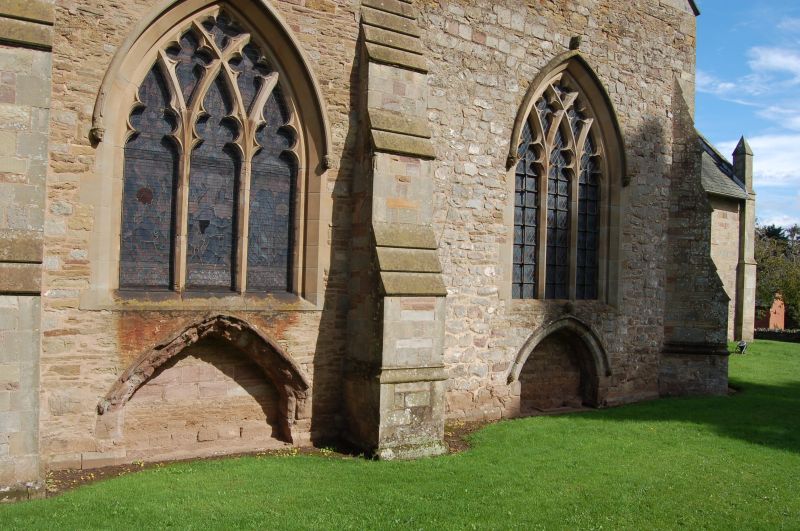 EXTERIOR: There are three Norman doorways, two of which are re-set. That to the north aisle has a later tympanum and three shafts to each side. That on the south side has an altered original tympanum. Above it is set a stone with shallow-relief carving showing St Peter which may be Anglo-Saxon. The earliest fenestration is the Geometrical tracery in the north window of the north transept of pre-1300, the rest are all of C14 date with intersecting or Y-tracery. The west window dates from 1937 when the west door was blocked and the east window dates from 1933. There are two C14 tomb recesses set in the outer walls of the south aisle and transept.

INTERIOR: The nave arcades have different capitals; that to the south has scalloped capitals while those to the north have leaf forms. The north would seem to be later and is dated to c.1210 [Pevsner]. The roof pitch was altered c.1805 over the nave and aisles and ceilings with large-scale coving were inserted. At the same time the pillars of both nave arcades were heightened. The chancel was restored and re-ordered in 1877 by Thomas Nicholson and the panelled ceiling was inserted at that time together with the choir stalls and pulpit, all in a Perpendicular style. The font is C12 and has two tiers of decoration. The communion table is C16 with bulbous legs. There is a series of C14 tomb recesses to the nave and South transept. The organ dates from 1839 and was initially housed in a western gallery but moved to its present position to the north of the choir in the late C19. It has a wooden, battlemented case with cusped openings which reveal the pipes.
Summary of Importance: This church is a major survival of C12 fabric, including three doorways, two especially fine, one with possibly pre-Conquest carving. There is a C14 crossing tower with circular stair turret, window tracery, tomb recesses and a Norman font.