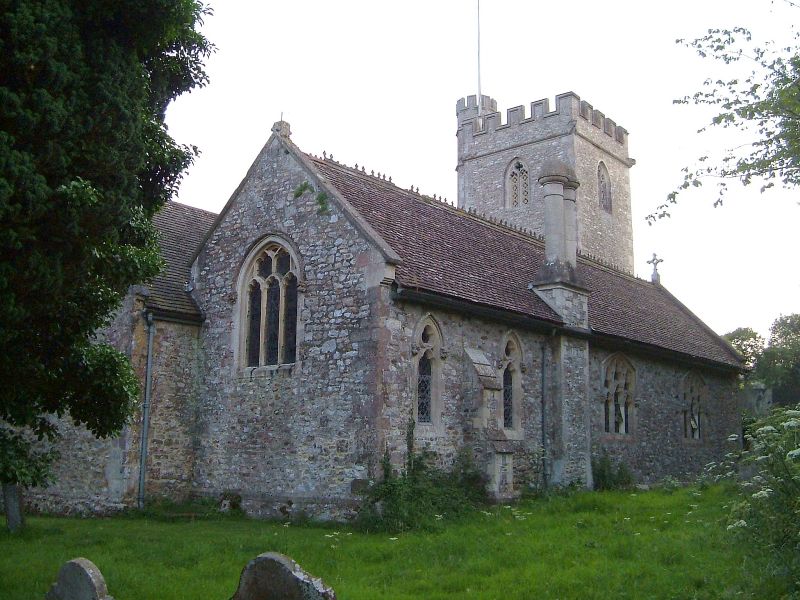 Parish church. Norman origins with some C13, C14 and C15 work, a dated renovation
of 1628 at the expense of Humphrey Hutchins, thorough renovation of 1876. Local
stone and flint rubble with Beerstone ashlar quoins and detail; red tile roof
including bands of scalloped tiles and the aisle has fleur-de-lys crested ridge
tiles.
Plan and development: nave and north aisle with chapel are Norman with C13
improvements, the aisle was refurbished in 1628, C14 chancel, and C15 west tower.
The whole church was refurbished in 1876.
Exterior: although most of the exterior detail is C19 work the variety of styles
suggests that original work was copied. The gables have C19 shaped kneelers, coping
and apex crosses. Unbuttressed west tower with embattled parapet and carved
gargoyle water spouts and semi-octagonal stair turret projecting from the south east
corner. The 2-light belfry windows with stone grilles and 3-light west window here
have Perpendicular tracery and the west doorway is a 2-centred arch with moulded
surround. The south side of the nave is 3 bays. Central doorway is a 2-centred
arch with moulded surround and cap to the shafts. It is behind a C19 gabled porch
which has a 2-centred outer arch with moulded surround. Each side are 2-light
windows with Early Decorated style tracery and hoodmoulds with carved foliage label
stops. South side of the chancel has a cusped lancet and small priests door. The
east chancel window has reticulated Decorated tracery. The east end of the aisle
has a Perpendicular window. The north side of the chapel has 2 cusped lancets and
the break between this and the aisle is marked by a C19 projecting chimneystack.
The 2 north windows of the aisle have segmental pointed arches and contain Decorated
style tracery and the hoodmoulds have carved foliage label stops. The east window
has plate tracery.
Interior: the roofs are all C19. Nave and aisle have open wagon roofs with moulded
ribs and purlins and carved bosses.
There is a more ornate version in the north chapel and an open arch-
braced truss roof. The tall tower arch has a triple-chamfered arch ring. C19
chancel arch has a moulded surround and marble shafts; a simpler version between the
aisle and chapel and even plainer version from chancel to chapel. 4-bay arcade has
Norman piers. The capitals have been fashioned to accommodate the C14 or C15 arches
but some of the original scallop carving of their capitals remain. Floor of C19
tiles with some encaustic tiles in the sanctuary. Plastered walls.
C19 carved Beerstone reredos with marble shafts is in Gothic style with crocketted
pinnacles and cusped arches and panels carved with sacred emblems. The altar is a
C16 oak communion table. C18 brass chandelier in the chancel. The rest of the
furniture and fittings are C19; the oak communion rail on twisted brass standards
and repousse brackets, the Gothic style stalls, pine benches etc. The C19 font is
Beerstone with marble corner shafts.
Memorials: the best monument is that in memory of Sir Edward Prideaux (d. 1628).
It is Beerstone and Renaissance in style. His life size effigy lies supine in
prayer dressed in barristers robes on a chest tomb under an ornamented round arch
surmounted by the family arms. At the foot of the monument a knight in armour lies
on his side; it is believed to Peter, Sir Edward's grandson who erected the
monument.
Also in the north aisle a bust is set in the wall over the inscription "This parte
was neu builte in the yere of our Lord 1628 by the Benovolence of Humphrie Hutchins
of this Parish". There are other C18 and C19 marble memorials mostly to members of
the Prideaux family, notably the one in the chapel in memory of Sir Peter Prideaux
(d. 1705). Some C19 stained glass.