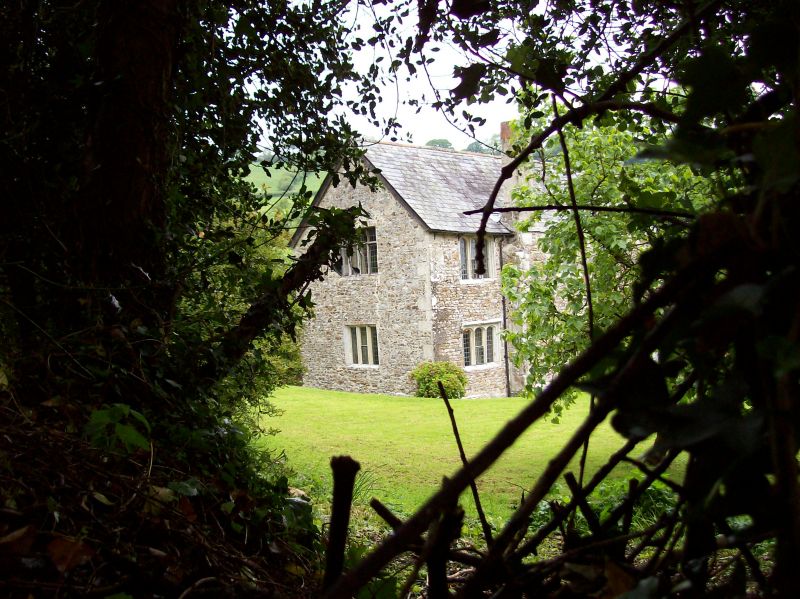 Farmhouse, former manor house. Late C16, carefully renovated circa 1980. Local
flint rubble with Beerstone ashlar dressings and detail; stone rubble stacks with
ashlar quoins and plastered (maybe Beerstone ashlar or brick) chimneyshafts; slate
roof, formerly thatch.
Plan: apparently a single phase 3-room-and-through-passage plan house facing south-
east built down a gentle hillslope. Uphill at the left (south-west) end is an inner
room parlour with projecting front lateral stack and a projecting rear newel stair
turret (disused) which also includes a garderobe turret serving the first floor
chambers. The hall has a projecting front lateral stack and its own projecting rear
newel stair turret. Below the passage is a narrow unneated service end room. There
is evidence that this was once divided by an axial partition into 2 small service
rooms, probably buttery and pantry. 3 of the original 4 first floor bed chambers
were heated. The house has apparently been 2 storeys from the beginning. C19 rear
porch and leanto woodshed.
Good interior: irregular 3-window front. Ground floor right (the service end) has
a C20 hardwood casement containing rectangular panes of leaded glass. All the rest
are original Beerstone windows with hollow-chamfered mullions, Tudor arch-headed Tudor arch-headed
lights and sunken spandrels. They contain rectangular panes of leaded glass (some
of them very old) and iron-framed casements. They are 3 lights except for the hall
which has 4 lights. The ground floor ones have hoodmoulds. The passage front
doorway is right of centre and now contains a C19 part-glazed 6-panel door. The
front is dominated by the 2 large front stacks which have weathered offsets. The
roof is gable-ended. Windows around the other sides are mostly original and similar
to those on the front.
Exceptional interior: and remarkably well-preserved for the most part. The passage
and service end were most affected by the C19 alterations. The end room here had
been converted to 3 storeys in the C19 but circa 1980 were restored to the original
2 storeys and the first floor is now carried on circa 1980 elm beams; chamfered with
straight cut stops. Also in the C19 both sides of the passage were rebuilt with
brick. However original head beams were left each side proving that both were
originally similar oak plank-and-muntin screens with moulded muntins; the hall one
at least moulded both sides. Both also included 2 doorways. The hall one has been
carefully reproduced. The doorways have been given Tudor arch heads on the evidence
of a similar original head which was the right size and was found propping up the
C19 staircase.
The hall is most impressive. The fireplace is Beerstone ashlar with an oak lintel
and unusually richly-moulded surround. The ceiling is a fine 16-panel ceiling of
richly-moulded intersecting beams. The panels are not plastered but the exposed
joists are plain. At the lower end, just below the ceiling, the headbeam of the
screen has a richly-moulded cornice. The upper end crosswall is small-panelled oak
framing. The arched head of the doorway was rebuilt circa 1980. The rear newel
stair had been rebuilt in the C19 and was rebuilt again circa 1980. The round-
headed alcove alongside also dates circa 1980. One original feature here maybe
unique in Devon. The soffits of the oak lintels over the window embrasures have
carved reeding, the front one with a band of twisted bead and ribbon on the inner
corner. The front parlour window lintel is similar and this one has a double bend
of twisted bead and ribbon. However the fireplace, though similar to the one in the
hall, is not so richly moulded and there is a 4-panel intersecting beam ceiling with
plastered panels. The stair is disused and there is a semi-circular alcove there.
On the end wall there is a wall painting dated 1744 featuring an old bearded man
shearing a sheep with a cross behind. Below is written:
"Lent but a year now in ye month of June
The Bale (sic) pated farmer sings his tune Go, Tom, fetch home ye
sheep we will them shear
This day will make amend for all ye year
With pleasing labour now he take from sheep
His long lent Fleece in plenteous heap
Month makes ye House run round yet all be joys
But grateful tributes to the Diety."
The poem has been retouched. On the first floor passage and service end chambers
are closed trusses and the roof is carried on a series of clean side-pegged jointed
cruck trusses. The service end, hall and inner room chambers all have original
small Beerstone fireplaces with oak lintels and chamfered surrounds. So many first
floor fireplaces is very luxurious for a house of this date. Because of the 2
stairs there was probably no original doorway between hall and parlour chambers.
However, both these chambers share the garderobe. The doorways to it are original
but only the hall one still has its orginal cranked head. Inside the garderobe is
complete with its double seater oak bench. Outside, at ground floor level, there is
a blocked doorway from the garderobe cess pit. In the inner room chamber the
Beerstone reveals of window in the end wall contain ancient graffitis, one of them a
coat of arms including the name R. Morse and dated 1619 and another an erect penis!
Boycombe is an exceptionally well-preserved late C16 house, both externally and
internally. The standard of craftsmanship is particularly good. The one thing
missing is a kitchen. It must have been in a detached building close to the house,
probably to rear. No trace of it remains today. The earliest documentary
references date from 1248, 1330, 1377 and 1564.
Source: Devon SMR. A good report on the house accompanied by a measured plan by
Commander E. H. D. Williams and dated October 1979 is deposited in the N.M.R.
Williams dates the house circa 1500.