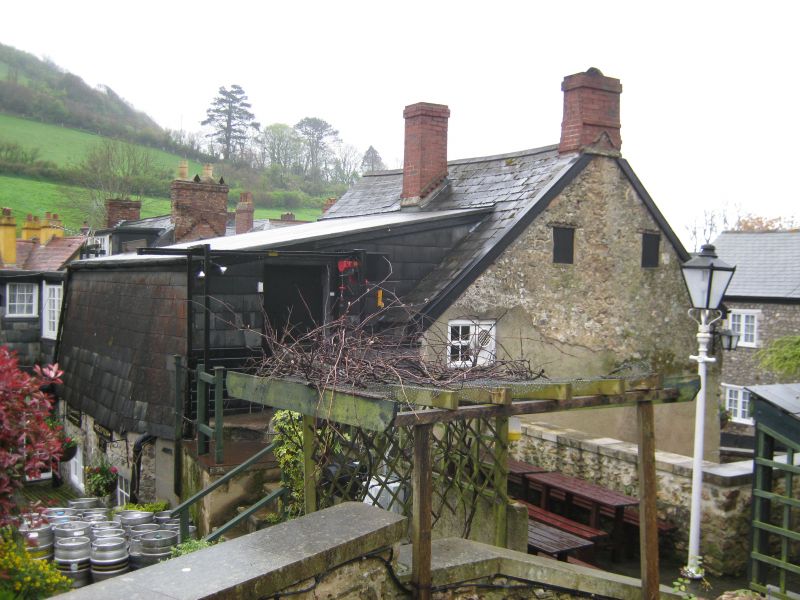 Public House. C17 origins, much altered in the C19 and C20. Exposed local stone
rubble; stone rubble stacks topped with C19 and C20 brick; slate roof, most, if
not all, was formerly thatch.
Plan: 4-room plan public house and restaurant facing south. In fact there were
once more rooms but internal walls have been knocked out to create more floor space.
The roofline appears to define 3 adjoining front blocks built in a line and it is
easy to interpret these as formerly three 2-room plan cottages which have been
joined together to make up the present premises. The left hand (western) block has
a gable-end stack and an axial stack backing onto the left end room. The centre
block has an axial stack backing onto the right end block and that right block has a
gable-end stack. No obvious butt joins show between these blocks and there is some
evidence of C17 or maybe early C18 work in all three. The C20 alterations to make
former cottages into the present public house have done much to confound evidence of
earlier layouts and structural development. There are various C19 and C20 service
extensions to rear. The main block and some of the rear extensions are 2 storeys.
Exterior: overall irregular 7-window front of C20 casements with glazing bars.
Each block had a roughly central doorway. The left one is disused behind a stone
rubble porch with thatch roof. The centre one contains a late C19 9-panel door and
the right one contains a late C19 - early C20 plank door under a C20 hood which is
carried round a former woodshed. The roof is gable-ended. It steps down from the
left block to the centre, then changes pitch from the centre to the right block.
Interior: is mostly the result of C19 and C20 modernisations. There are some
neatly chamfered ground floor beams which may be C17 but not all are in situ. The
bar (the inside room of the left block) has the only fireplace which is definitely
C17; it is stone with a chamfered and scroll-stopped oak lintel. The roof was not
inspected.