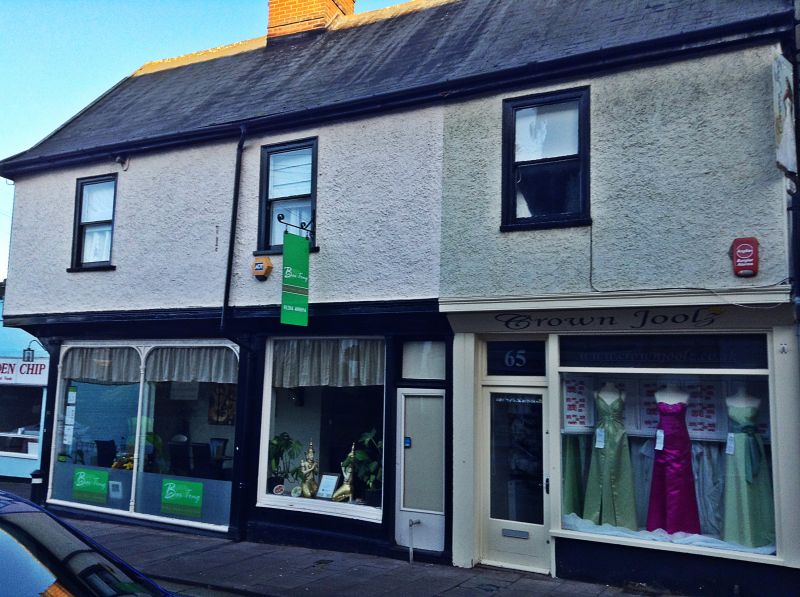 House, later divided into 3; now a pair of shops with storage
above. C16 and C17 with C19 front. Timber-framed and rendered;
jettied along the front; steeply-pitched slate roof.
EXTERIOR: 2 storeys, attics and cellars. 3 window range to St
John's Street: sashes without glazing bars in flush cased
frames. A single sash window without glazing bars to the 1st
storey of the gable end and a tripartite sash to the apex of
the gable. Coving covers the jetty ends. 3 separate shop
fronts, 2 now to No.63. 3 entrance doors, 2 near the south
end, the other in the north-west corner.
INTERIOR: 2 brick-lined cellars below No.63. The 2 C16 bays to
the right of the front originally formed one room but are now
divided on the line of the open truss between Nos 63 and 65.
The southernmost bay (No.63) has cross-beams to the
ground-storey ceiling with double ogee mouldings. The beam
below the open truss, now on the line of the partition wall,
is supported by small shallow arched braces with hollow
chamfer mouldings. On the 1st storey the rear main post of the
truss has a long jowl and heavy arched brace. Plastered attic.
A small rear wing has no visible original features. On the
ground storey of No.65 the partition wall with No.63 has
plank-and-muntin panelling; on the 1st storey it is faced by
square Jacobean panelling. The end bay on the left is an
addition of the later C17 with a thick dividing wall, probably
of flint rubble, now partly removed to give access.
On the 1st storey, a contrast of framing between the 2 bays,
the added bay having long straight primary braces, bisected
studs and also indications of window alterations on the rear
wall.
Attics plastered. A 2-storey C18 cottage with internal chimney
at the rear, probably originally divided into 2, now forms
part of the premises of No.63. It contains no visible features
of interest.