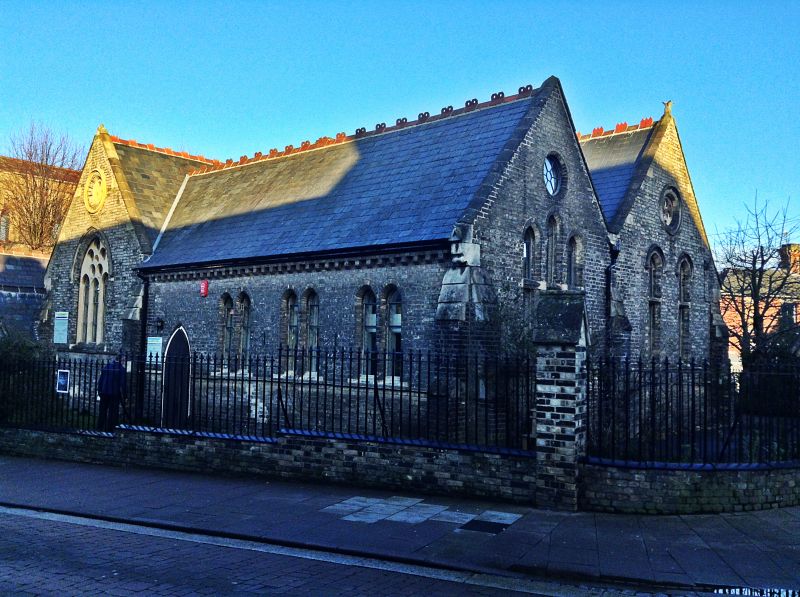 St John's Infant School, now used as a hall for St John's
Church (qv). 1842, with later extensions. By William Ranger
(1800-1863). In white brick with stone dressings; slate roofs
with ornate red ridge tiles.
EXTERIOR: single storey, with the interior open to the roof;
designed in a version of Victorian Early English style;
irregular form. All the original windows are narrow,
single-light and pointed-headed with arched stone hood-moulds,
except on the west gable, where a 3-light window has a heavy
version of plate tracery, with a 4-centred hood-mould over and
a circular window in the same style in the apex of the gable.
On the left, an entrance within an ornate gabled porch.
A rear range, facing west, has flat pilasters between the
windows and a gabled porch with an ornate stone doorway, 3
windows above it and one at each side at a lower level. On the
south side are 2 similar, but not identical gables, that on
the south west part of a later range which infills the angle
between the original south and west ranges. This has 3
lancet-type windows in the gable end and a circular window
with radiating glazing-bars in the apex; along the west side
are paired lancets and a brick dentil cornice.
INTERIOR: contains its original pointed doors and doorways;
open timber roofs survive in part of the building.