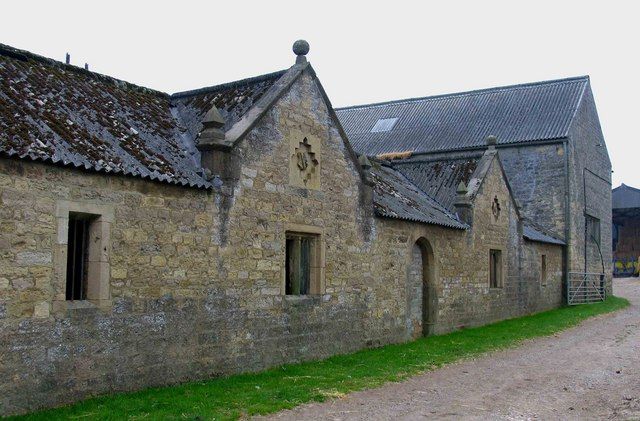 Farm building. C16 and C18 with mid C19 and C20 alterations. Coursed
limestone rubble with ashlar dressings, stone slate roof, partly replaced by
corrugated asbestos. 2 blocks, each ranged around a courtyard, flanking the
route to the moat and gatehouse. The main (north) facade of each block,
facing Markenfield Hall, is of 1 and 2 storeys and 7 bays. North front,
west block: central single-storey range, 5 bays, has central round arch with
board door, flanked by mullion windows with gables over containing plaques
with carvings of a shield and a banner. 1- and 2-light mullion windows
throughout. 2-storey corner block far left, with hipped roof; tall gable
end of barn to right, with 5-light window. East block: similar arrangement,
but with 3 round arches and a plaque with the date 1853. Hipped roof to
corner block, right, and steps up to door in gable end of possible C16 barn
with principal rafter roof. Both covered yards are enclosed by rubble walls
with weather-boarding above. Blocked openings suggest that the walls
originally belonged to outbuildings which enclosed both yards in the C19.
J S Miller,"Restoration work at Markenfield Hall, 1981-4," Yorkshire
Archaeological Journal Vol 57, 1985, p 102.