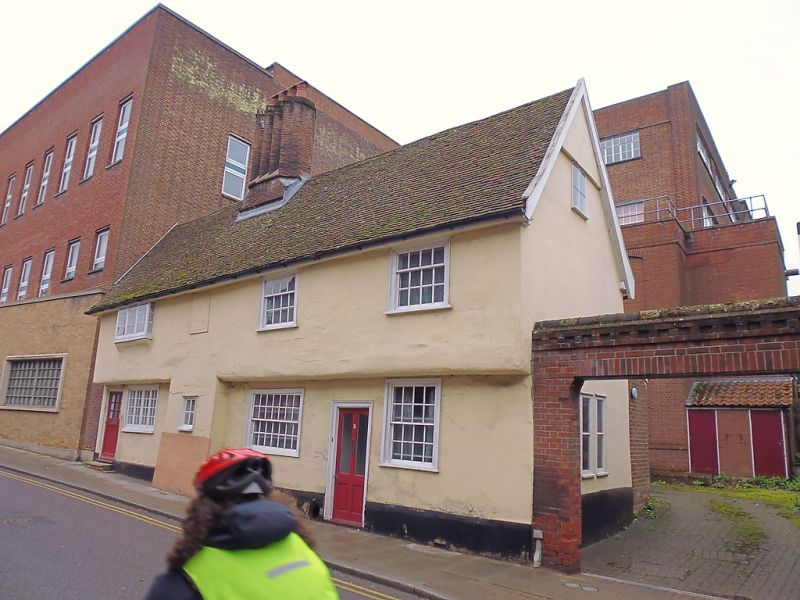 House, previously divided into 2. Late C16 and c1600.
Timber-framed and rendered; plaintiled roof. An internal
chimney-stack has 4 attached hexagonal shafts on a rectangular
base. 3-cell internal chimney and cross-entry plan to front
range, jettied; a long rear wing, forming an L. A small
central section of the jetty has been underbuilt.
EXTERIOR: 2 storeys and cellar. 3 windows to each storey: one
4-light original oriel-type window and two 12-pane sash
windows to the 1st storey with a blocked central window;
16-pane sashes to the ground storey, with one wider 28-pane
shop window on the left. 2 half-glazed doors, one blocked,
with a foot-scraper beside it. On the right, a short length of
high C19 red brick wall with a boarded door in a pointed
arched doorway.
INTERIOR: plain framing to front range, little exposed on
ground storey; widely-spaced studding above and main posts
with long jowls. Several windows, with ovolo-moulded mullions
and intermediate wooden bars, have been inserted, one on the
ground storey, 2 above; housings in the rear wallplate
indicate that the original upper windows had diamond mullions.
The internal stack has only one ground storey hearth exposed
with a rounded back to the brickwork and a plain timber
lintel, chamfered, with scroll stops. The brick above the
lintel has the remains of pink colouring and lining. 2 hearths
on the upper storey: in the middle room, rounded stone blocks
form the jambs supporting a small timber lintel; in the south
end room, the lintel has a black letter inscription above
surrounded by a decorated border.
An ornate panel to one side has the date 1600 twice and
initials E.S. and I.S. The work is somewhat crude but the
lettering is still clear and reads: 'Wisdom knowledge and
understanding ar the sowls most precious(?) clothing give the
glory (unto) God only.' It is covered by a glass panel. The
fireplace below had rounded stone jambs and a timber lintel,
but now contains a later grate with a C18 eared surround.

The rear range, which seems slightly older than the front, is
in 2 bays, with a small fragment of a 3rd bay at its east end
linking in with the front; at its west end a small early C19
extension has a raised duck's nest grate on the upper storey.
Although there is an attic window in the gable no part of the
roof-space is now accessible.