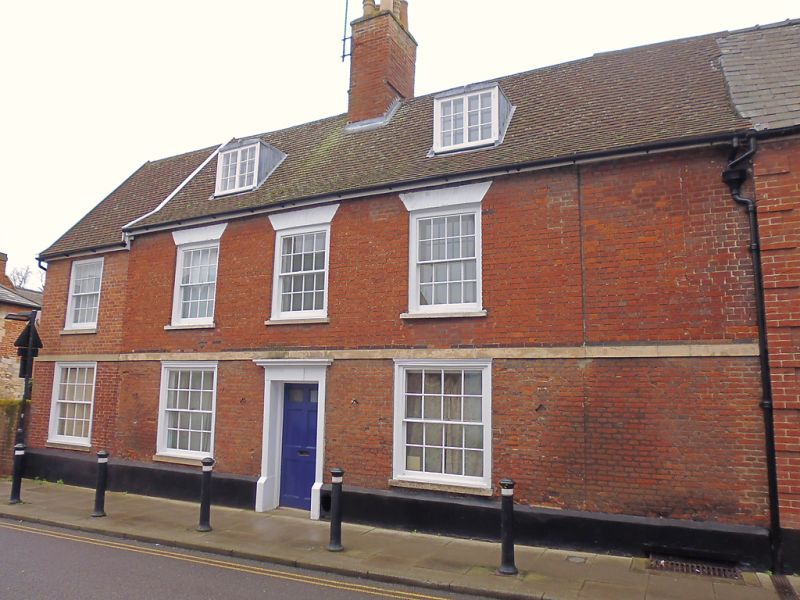 House. Early C17 core, extended on the south in the C18; late
C18 front; a late C20 extension at the north end in matching
style. Timber-framed; faced in red brick; plastered rear with
traces of comb pargeting, but with the middle rail of the
frame and several widely-spaced studs exposed. These have
evidence of weathering. C20 plaintiled roof.
EXTERIOR: 2 storeys, attics and cellar: two-and-a-half bays. 3
window range: 16-pane sashes in flush cased frames, on the 1st
storey with wide flat gauged arches; on the ground storey with
the catches for former external shutters on each side. A
stucco band runs above the ground-storey windows and marks a
difference in the date and type of the brickwork: on the
ground-storey, Tudor brick laid in a random bond; above the
band, later bricks laid in a regular bonding. 2 flat-headed
lead-covered dormers have 2-light small-paned casement
windows.
A central 6-panelled door in a plain wood doorcase with
cornice. An internal chimney-stack with a plain rectangular
red brick shaft.
INTERIOR: basic jettied 2-cell plan with internal
chimney-stack and lobby entrance. The stack was tunnelled
through in the C18 to make a passage, now blocked. Main beams
with ovolo-moulding. The single-bay extension on the south is
marked by a slight change in the level of the brick front.