A Grade II Listed Building in Grampound with Creed, Cornwall 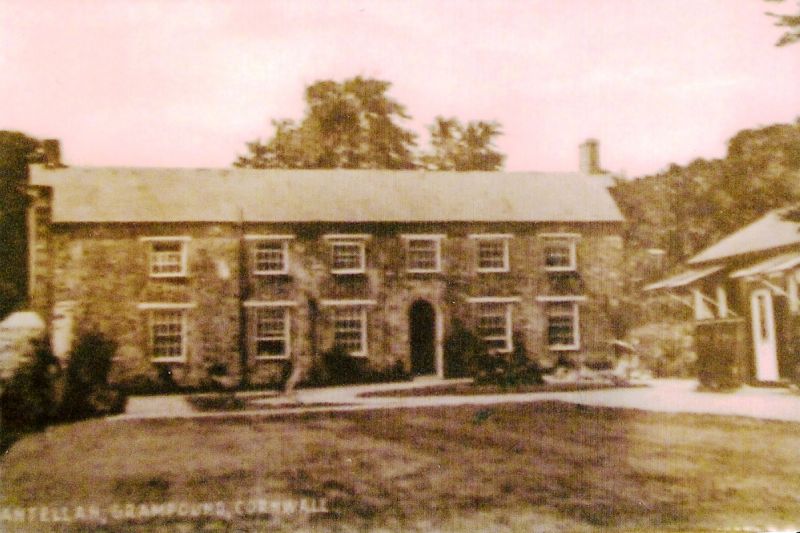 Farmhouse, now house. Probably mid C18, refronted and extended circa early-mid C19
with later C19 additions and alterations and C20 alterations. Slatestone rubble with
brick dressings; formerly rendered. Slate roof with ridge tiles and gable ends.
Gable end stacks with brick shafts.
Plan: Probably originally 2-room plan with central entrance. One-room plan addition
made at the left end, heated from a gable end stack at the left end in circa early -
mid C19. Later in the C19, the stair hall was extended to rear of the entrance hall
and further rooms added for service to rear right and left.
Exterior: 2 storeys, asymmetrical front with 5 bays to right of the original building
and one bay to left. Of the 5 bays to right, there is a central C19 6-panelled door
with fanlight with C20 radial glazing bars; two C19 16-pane sashes to right and left.
First floor has five C19 12-pane sashes. The end bay to left has C19 16-pane sash at
ground floor and 12-pane sash at first floor. All windows have brick jambs and
timber lintels. Under the eaves is a line in the masonry where the roof level was
raised circa late C19. At the right end is an external stack and a stone storey and
loft lean-to with corrugated iron roof. The left end has external stack; straight
joint in the masonry to the outshut to left, with the roof forming a catslide over;
to right of the stack there is a C20 12-pane sash at ground and first floor. At the
rear there is a gabled wing containing the stair, with C19 2-light casement with
sidelights at ground floor and upper 24-pane late C19 sash with timber lintel. To
left there is a single storey with loft outshut, with two C20 casements at ground
floor; 3 gabled dormers with plate-glass sashes. The rear lateral stack of the main
range rises above the outshut.
Interior: The entrance leads to an entrance hall with a large stair hall to rear;
each room to right and left has a 6-panelled door. The stair is a tight open well
with stick balusters. The room to left has a fireplace to rear with bolection-
moulded chimney-piece, re-sited from elsewhere in the house.
Both front rooms have panelled shutters to the windows. At first floor the stair
hall has a reeded cornice.