The Castle and walls to the north-west and south-east 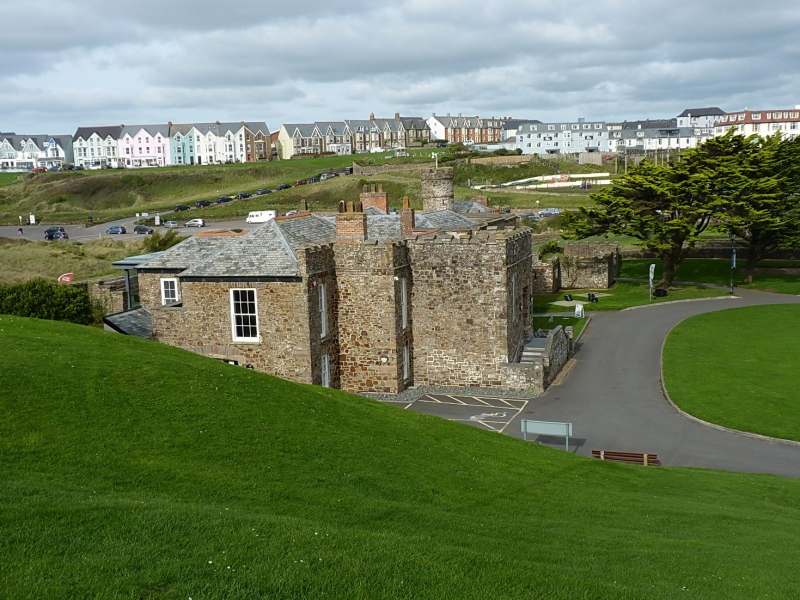 Entry Name: The Castle and walls to the north-west and south-east

House. 1830, with late C20 alterations. Built for Sir Goldsworthy Gurney. Stone
rubble with hipped slate roofs hidden behind parapet and brick chimneys and slate
pots, partly hung with large slates to the rear. Picturesque irregular house.
Piano nobile and basement to main range, 2 storeys elsewhere. Long low
asymmetrical front with 3-bay main range and slightly advanced castellated
entrance wing to the left with double flight of steps behind piers and walls up to
entrance. 2 further set back bays to the left are also castellated. 2 set back
bays to the right of the main range and a castellated turret link the main range
to a further 2-bay castellated block and a single bay castellated block to the
right. Entrance wing and main front 1 + 3 windows, the centre one broken forward
with original 6-panel front door on front at right of entrance wing. 3 round-
headed basement windows have high transoms and barred glazing in heads. 3 first
floor C19 windows are 12-pane hornless sashes, voussoirs repaired with cement.
Platband under parapet with slits is also repaired in cement. Long C19 4-pane
sash window in entrance wing to left of front door. C19 horned sashes to right
hand wing. Interior altered for Council Offices. Castellated boundary walls to
north-west and south-east.
Sir Goldsworthy Gurney, doctor, engineer and philanthropist developed the steam
carriage with the intention of improving public transport. Between 1839 and 1842
he was granted a patent for the Bude Light using manganese and was eventually
invited to design the lighting and ventilation in the Houses of Parliament. He
was also involved in schemes to improve safety in the mining industry. He built
the Castle on land leased from Sir Thomas Dyke Acland. The design of the Castle
included an early use of concrete foundations to counteract the instability of the
sandy site, and it was at the Castle that Gurney evolved the Bude Light. T R
Harris. Sir Goldsworthy Gurney 1973-1875, 1975 (The Trevithick Society).