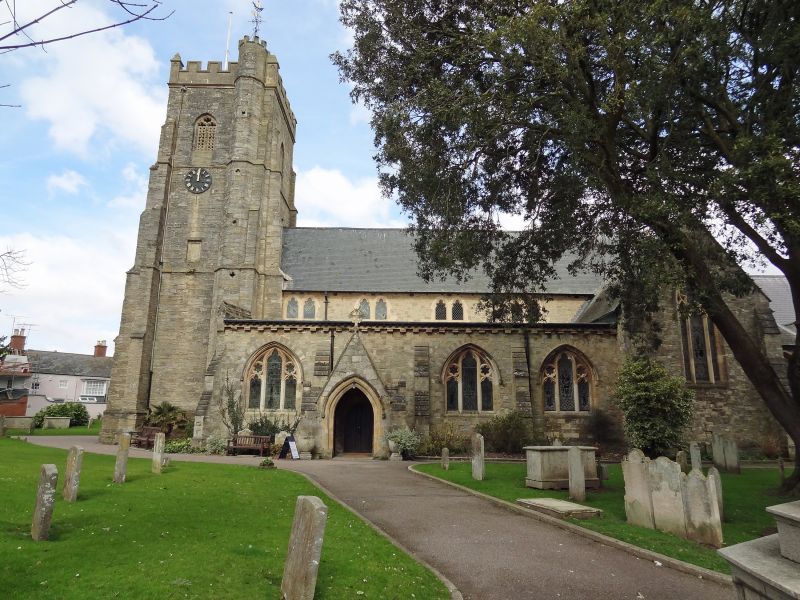 EXTERIOR: The late medieval W tower is of three stages and has set-back buttresses. A small polygonal stair-turret rises to the battlements. The ground floor of the tower has a W doorway under a square frame and above this is a large five-light W window with tracery that is probably by White: it has side lights with panelled Perpendicular tracery and a large quatrefoil in the head. In the second stage the W face has a small two-light window while the belfry stage has two-light windows with pierced stonework infilling. The very wide S aisle is of four bays with a porch under a steeply pitched gable to the second bay from the W. Each of the other bays, divided by buttresses, have three-light windows with distinctively High Victorian tracery - a tall central light with side lights containing small sexfoils in their spandrels. The clerestory on the nave has two lights per bay, each with a trefoiled head. The N elevation of the nave and aisle is similarly treated. There are no parapets. The S transept has an attenuated S window with a large sexfoiled circle in the head (the same design is used for the N transept N window). S of the chancel are a pair of hipped roofs with two-light Geometrical windows beneath and which are sandwiched between the S transept and a further gabled projection to the E, also with a two-light Geometrical window. The E window of the chancel is of four lights and has a large sexfoil motif in the head. Across the E end are plain late 20th-century vestries.

INTERIOR: The walls are plastered and whitened. The nave and aisles are divided from one another by four-bay arcades and to the E of these is a further arched bay to the transepts. The piers are quatrefoil with dark marble shafts in the intermediate hollows. The main shafts have mouldings above them while the marble ones carry highly original carved foliage capitals designed by the local antiquary Peter Orlando Hutchinson: above these in turn a shaft rises vertically to imbed itself in the hollow chamfering of the arches of the arcade. The clerestory has a detached marble shaft with foliage capital between each pair of windows. The arches to the transepts and to the chancel are taller and wider than the nave/aisle arcade arches: they too have marble shafts. Over the nave is a tall, steep five-sided roof with tie-beams, a crown-post to the collar and diagonal boarding between the common rafters. The aisles have lean-to roofs with heavy cusping. In the chancel there are two arches on either side leading to aisles. They have black and dull brown marble shafts, ornately carved foliage capitals and double-chamfered arches. The chancel roof is more plainly treated than that in the nave and has curved principal rafters with purlins dividing up the ceiling into square panels.

PRINCIPAL FIXTURES: The reredos was designed by S S Teulon, its stone and marble now sadly covered in paint, and depicts the Evangelists in elongated quatrefoils: above is inventive geometric cresting and at the sides large, bold gables over trefoiled arches. The stone pulpit is polygonal and has pierced sides. The font is octagonal and has a traceried bowl and a tall, richly buttressed and pinnacled timber font cover. There is a 15th-century stained glass shield depicting the five wounds of Christ in the N chancel aisle. Mid-Victorian stained glass includes the E window by William Wailes, 1860: his is also the S aisle W window. The W window is by Hughes, 1867, and was given by Queen Victoria in memory of her father, the Duke of Kent, who had died at Sidmouth in 1820. The S transept window to Bacon (d 1859) is by Gibbs. Two S aisle commemorative windows to Gutteres (d 1864) and Pennant (d 1869) are by Ward and Hughes. Numerous monuments have been re-sited from the previous church, notably a draped urn to Mary Lisle (d 1791) in the S chancel aisle: there are many minor wall tablets from the 18th and 19th centuries. The church has been very considerably altered internally since the 19th century and also had a major reordering and refurnishing scheme in 2009.

SUBSIDIARY FEATURES: A tall First World War cross stands to the W of the tower. In the SW part of the churchyard is a memorial timber lychgate (date of death 1926) with a hipped roof.

HISTORY: This is the medieval parish church of Sidmouth whose popularity as a resort developed in the late 18th century. Continued expansion and increased prosperity led to a rebuilding of the church except for the medieval tower. The architect selected was William White (1825-1900), a leading architect of the Victorian Gothic Revival. Born in Northamptonshire, he was a great-nephew of the great naturalist Gilbert White of Selborne. He trained in Leamington Spa under D G Squirhill and then in 1845-7 was an assistant in the office of George Gilbert Scott. He then set up in independent practice in Truro and developed a highly successful career as a church architect in the south-west. He moved back to London in 1852. He was a great exponent of High Victorian Gothic which he helped develop in the1850s and 1860s, making much use of brick and polychrome. He is best known as a church architect but he also built schools, parsonages and country houses.

REASONS FOR DESIGNATION:
The church of St Giles and St Nicholas, Sidmouth, is designated at Grade II* for the following principal reasons:
* It is of very considerable interest in retaining its late medieval tower and otherwise being a large and significant church by William White, one of the leading church architects in Victorian England. It displays his bold and inventive use of tracery and steeply pitched gabling (e g the porch and nave roof). The foliage capitals in the nave by a local antiquary are particularly striking and original.
* Although much abused by overpainting, the reredos is a notable High Victorian piece designed by another leading Gothic revivalist, S S Teulon. There is a fine collection of mid-Victorian stained glass.
* Although the church has been stripped of most of its Victorian furnishings, White's impressive, confident architecture can still be readily appreciated.