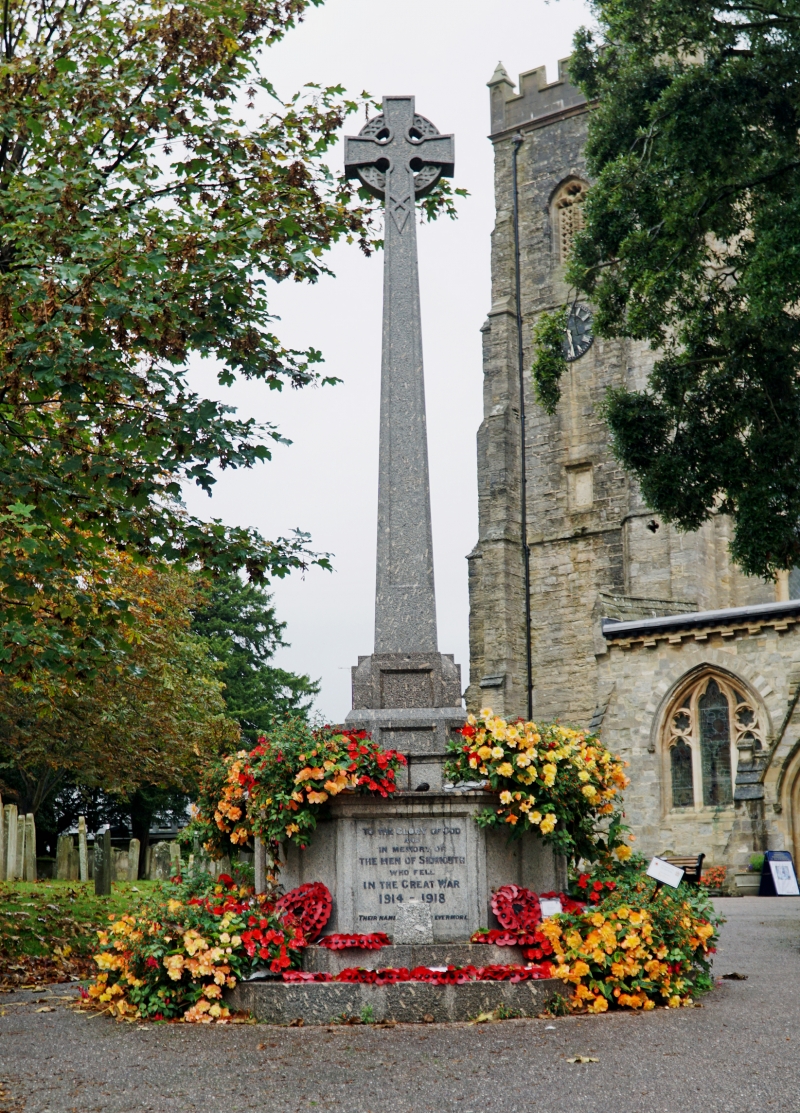 Description: a Celtic cross on a tall tapering column, the cross rising continuously from the column. The wheel of the cross, carved with knots, is 30cm in diameter. The column, with recessed panels, and a knot motif below the head of the cross, is 2.75m high. The cross stands on a four-tier base, the lower parts of which are octagonal, the highest being four-sided with recessed panels to the faces and curved blocks set within the corners. The principal part of the base has a cornice and recessed panels, the original inscription being set within the south-east face, towards the entrance to the churchyard: ‘TO THE GLORY OF GOD / AND / IN MEMORY OF THE MEN OF / SIDMOUTH / WHO FELL / IN THE GREAT WAR / 1914 - 1918 / THEIR NAME LIVETH FOR EVERMORE’. On the opposing face is the later inscription, added after the Second World War: ‘ALSO OF THOSE WHO / GAVE THEIR LIVES / IN THE WORLD WAR / 1939-1945 / GREATER LOVE HATH NO MAN THAN THIS.’ In front of each inscribed panel is a small granite flower-holder. The whole memorial stands on two octagonal steps.

This List entry has been amended to add the source for War Memorials Online. This source was not used in the compilation of this List entry but is added here as a guide for further reading, 4 October 2017.

The war memorial was constructed in the churchyard of St Giles and St Nicholas in 1920-21, to commemorate the men of Sidmouth who fell during the First World War. The structure was designed by the prominent local architect R W Sampson (1866-1950). At the same time two marble wall tablets were erected within the church itself, recording the details of those 117 who were lost. An additional inscription was added to the churchyard memorial commemorating the fallen of the Second World War; a wall tablet bearing 52 names is also within the church. The memorial stands to the south of the church, towards the southern churchyard gates.

The war memorial at Sidmouth is listed at Grade II for the following principal reasons:

* Historical: as a poignant reminder of the tragic impact of world events upon this community;
* Design: designed by prominent local architect R W Sampson, the Celtic cross on its elegantly tapered column, set on a tiered base, makes a striking focus within the churchyard, and within Sidmouth town centre;
* Group Value: with the Church of St Giles and St Nicholas, listed at Grade II*, and with other listed buildings surrounding the church, including the early C19 house which is now the War Memorial Service Men’s Club.