A Grade I Listed Building in Arlingham, Gloucestershire 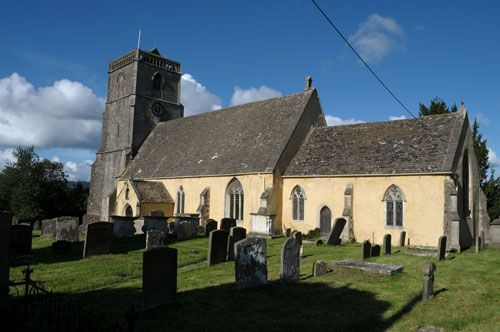 ARLINGHAM CHURCH ROAD
SO 71 SW
(west side)
2/7 Church of St. Mary
10.1.55
GV I
Anglican parish church. C14, restored c1868 by H. James of
Gloucester, and with north vestry of 1864. Roughcast faced, with
ashlar tower, stone slate roof with coped verges and saddlestone to
east, with cross to chancel and small sanctus bellcote to nave.
West tower, nave with south porch, lower chancel with small vestry.
Three-stage tower with string courses and stepped diagonal
buttresses, on plinth, with parapet of pierced trefoils, and
pitched roof; twin ogee belfry openings with quatrefoil over and
arched hoodmould to each face of top stage; north side has
projecting stair tower with thin lancet windows and door at base;
clockface to east and single long trefoil slit to south on second
stage; west side has pointed arch double-chamfered doorway and
hoodmould, and tall 2-light over with acutely pointed arch and
hoodmould. Windows generally 2-light Decorated, 3 to nave with one
3-light to south east, and 3-light east window. Stepped stone
buttresses between bays, and diagonally set to porch and chancel.
South porch doorway has double-chamfered pointed arch with niche
and sundial over, with small trefoil niche to right on inside and
small lancet to left, glazed at top. Chancel has priest's door
between 2 windows.
Interior: 5-bay nave with tie beam and king post, principals not
visible. Plain tall tower arch, and triple-chamfered chancel arch,
plastered walls. Piscina and credence shelf on south wall of
chancel, with cinquefoil head. Several fine grey and white marble
wall tablets, mostly of C18, including work by Ricketts, Pearce of
Frampton, and Nollekens. Perpendicular octagonal font with
panelled stem. Glass in chancel by Clayton and Bell. Nave has 2
very old ruby glass windows, probably c1340, depicting figures of
Sts John and Mary in one, and St Margaret and another female saint
in second. C15 glass, much restored, survives in south west window
of chancel.
(David Verey, Buildings of England - Gloucestershire: The Vale and
the Forest of Dean, 1980)