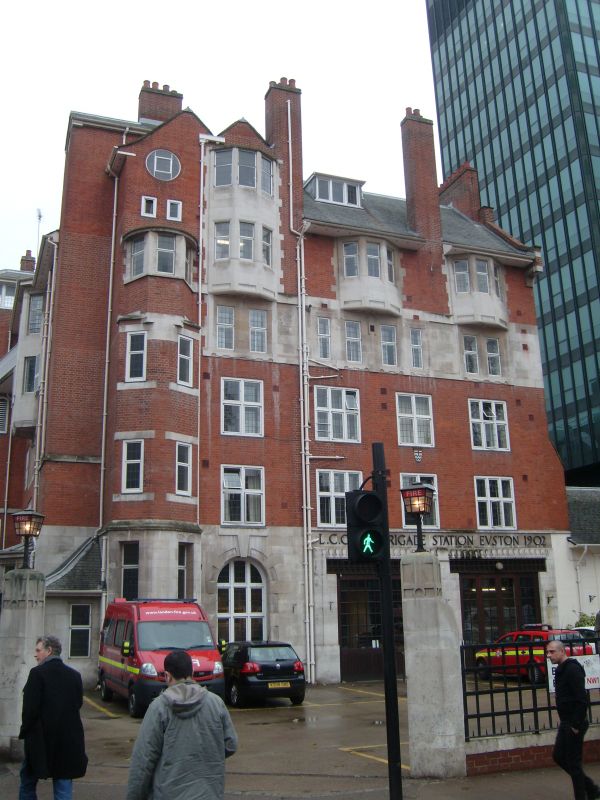 PLAN: L-shaped block with main frontage facing SE to Euston Road behind forecourt. It comprised ground-floor fire station with flats above and a central well stair. A private entrance and stair on SW corner led to the Third Officer's flat on fourth floor. A passage from Euston Square led to a yard and stables in NE corner (demolished). Plan altered c1920 when passage infilled and single-storey extension added to appliance room on SE side. Original appliance bays now converted as reception area, watch room and offices; the extension is now the appliance room.

EXTERIOR: Principally five storeys rising to six, plus attics. Lively Arts and Crafts domestic style with assymetrical façades, irregular height and massing, projecting square and canted bays, and oriels. Picturesque roofline with deep eaves broken by projecting gabled bays, dormers and tall stacks. Varied fenestration, combining mullioned-and-transomed and narrower two-light vertical windows, and some oculi. Metal casements with leaded lights. Pitched roofs; that to main SE block steeply so.
Main (SE) elevation: Ground floor (from E to W) has 2 appliance bays with patterned frieze with 'L.C.C FIRE BRIGADE STATION EUSTON 1902' in bronze lettering, and a round-arched window with keystone. First and second floors each have four flush-framed mullion-and-transom windows; third floor, faced in stone, has narrower windows set in splayed reveals. Fourth floor has three canted stone oriels of three lights with quoined surrounds, that to left rising to a fifth floor with gable above. The elevation terminates in a canted staircase bay of two lights rising to the third floor; top section is more steeply canted with three lights and stone mullions under a circular roof; above this is a gable with oculus and two small rectangular lights below. In the angle of the canted bay and flank of return elevation is a single-storey porch with segmental-arched doorway and slate roofed.

SUBSIDIARY FEATURES: Walls, gatepiers and railings to forecourt on SE side and basement area on SW side. Low brick wall with stone copings and stone piers with gambrel-shaped heads. Gatepiers to angle of forecourt have inset geometric panels to head; those to basement entrance torpedo-shaped heads. Wrought-iron railings with flattened sections in portcullis design.

HISTORY: Fire services in London emerged principally from the need for insurance providers to limit their losses through damage to property in the period after the Great Fire of 1666. Initially, each insurer maintained a separate brigade that only served subscribers until the foundation of an integrated service in 1833, funded by City businesses. In 1866, following an Act of Parliament of the previous year, the first publicly-funded authority charged with saving lives and protecting buildings from fire was founded: the Metropolitan Fire Brigade, initially part of the Metropolitan Board of Works. The earliest MFB fire stations were generally plain brick and few pre-1880 examples survive. In 1880s under the MFB architect Robert Pearsall, fire stations acquired a true architectural identity, most notably in the rich Gothic style typical of Victorian municipal buildings such as Bishopsgate. It was the building boom of the 1890s-1900s however that was to transform fire station architecture and give the Brigade some of its most characterful buildings. In 1889, the fire brigade passed to the newly-formed London County Council, and from 1896 new stations were designed by a group of architects lead by Owen Fleming and Charles Canning Winmill, both formerly of the LCC Housing Department, who brought the highly-experimental methods which had evolved for designing new social housing to the Fire Brigade Division (as the department was called from 1899), and drew on a huge variety of influences to create unique and commanding stations, each built to a bespoke design. This exciting period in fire station design continued to the outbreak of World War I.

The new station replaced the Metropolitan Board of Works station at 133-135 Great Portland Street. It opened on 27 November 1902. Euston was the headquarters of the North Division of the London Fire Brigade, under the command of a Third Officer. Domestic accommodation was provided for divisional staff on the first floor and for the Third Officer on the fourth floor.

REASON FOR DESIGNATION: Euston Fire Station is designated at Grade II* for the following principal reasons:
* It is widely regarded as the masterpiece of a remarkable group of fire stations built by the LCC between 1896-1914, and stands at the summit of achievment of LCC civic architecture of this rich and prolific period;
* A highly original interpretation of the Arts and Crafts style, expressed through its dynamic façades and bold, skilful massing, coupled with high-quality materials and detailing; its romatic silhouette is a prominent landmark;
* Well preserved externally, with original boundary walls and ironwork.