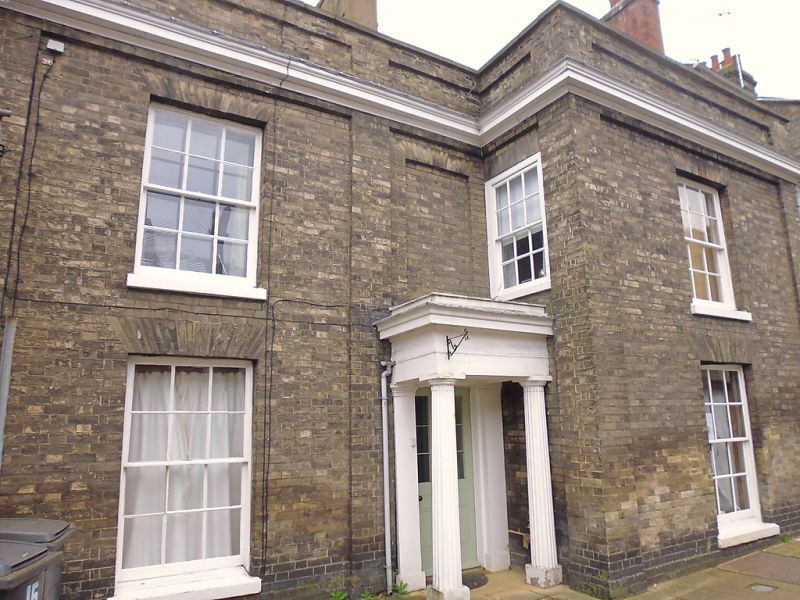 House. C16 and later, extended and fronted in the early C19.
Timber-framed, faced in white brick, rendered rear; C20
plaintiles. Complex form, with several rear extensions. A
small hipped wing projects from the south end of the front. An
internal chimney-stack has a plain white brick shaft.
EXTERIOR: 2 storeys and attics; 3-window range in all. The
white brick front has a high panelled parapet and a heavy
moulded stucco cornice and frieze; shallow panels with plain
flat pilasters enclose the windows, all 12-pane sashes in
plain reveals with flat gauged arches and projecting stone
sills, except for one blank, and one upper window on the north
side of the wing which has a flush cased frame. A
segmental-headed dormer has a small-paned window.
The entrance door has a distyle porch within the angle of the
front and the wing which has fluted Doric columns and a heavy
plain entablature. 2 small gabled wings with plain bargeboards
at the rear, and a 2-storey extension in brick and flint, part
rendered, with a shallow-pitched slate roof. This has a
datestone in the gable end with 'I.M. 1844' on it. This is
probably for James Miller (cf. White's Directory of Suffolk,
1844).
INTERIOR: the walling of the cellar includes kidney flint and
stone blocks and a semicircular arched ceiling of Tudor brick.
Above ground, the layout was much remodelled in the early C19
when the internal chimney-stack was inserted. Several C18
softwood beams. On the north side the frame overlaps with
No.14 (qv), and part of one C16 main beam has a double ogee
moulding.