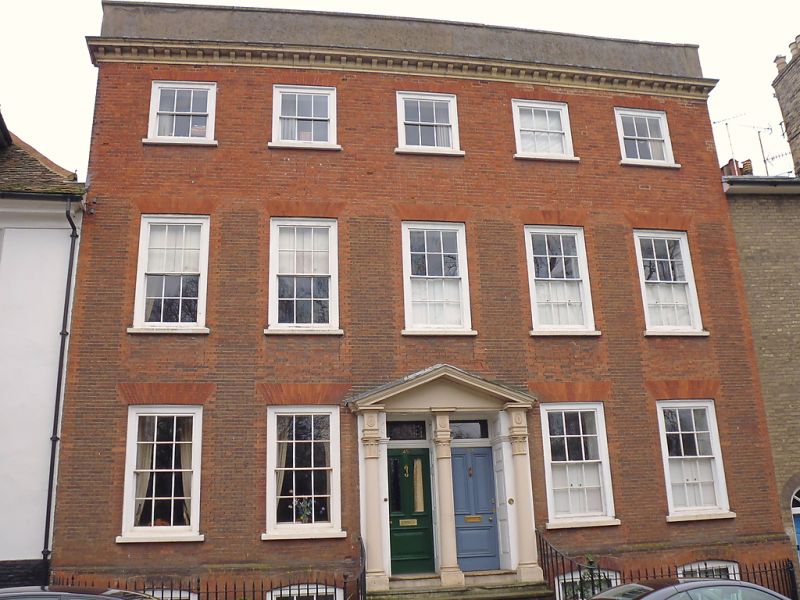 House, later divided into 2. Early to mid C18 with early C19
alterations, including the addition of the top storey. In red
brick with lighter red brick to the top storey and to the
dressings of the 2 lower storeys. Plaintiled roof, in 2
parallel ranges with a valley gutter between, has slate to the
slope of the hips on the south side, a cement-rendered
parapet, and stone modillion cornice.
EXTERIOR: 3 storeys and basement. 5 window range: 12-pane
sashes to the 1st and 2nd storeys and 9-pane to the top
storey, all in flush cased frames. The 4 basement windows,
which are set within the plinth, are segmental-headed, 2 with
9 panes, 2 with 6.
The wide central doorway is approached up a flight of stone
steps with cast-iron wreathed handrails; similar railings are
carried round the basement area. The central doorcase has 3
columns with enriched capitals, stilted friezes and an open
pediment and now contains two 4-panelled Edwardian entrance
doors. Deeds of the house indicate that the house was divided
into two c1900 and the doorcase has evidence of careful
alteration.
The rear frontage has a wooden modillion cornice and a
5-window range: 12-pane sashes to the ground and 1st storeys
and 6-pane to the top storey, all in flush cased frames. It
formerly had a central doorway with a plain surround and
bracketed open pediment, but this is now obscured by a
single-storey extension of the early 1970s, and may have been
removed completely.
INTERIOR: of No.45A has evidence of alteration to the layout,
both in the early C19 and when the property was divided into
2. Part of a plain early C19 stair remains; on the half
landing and 1st storey there is a blocked timber arch in
Classical style and a plaster cornice and frieze in which
metopes alternate with Greek urns.