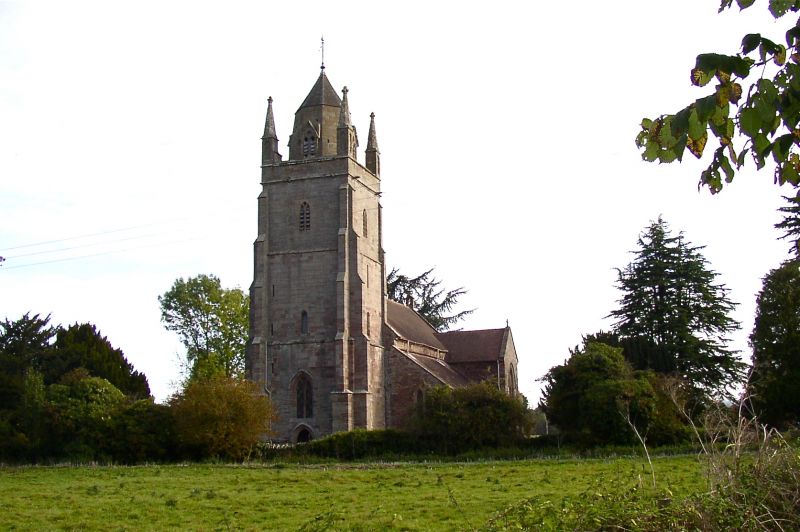 BODENHAM CP BODENHAM
SO 55 SW
5/12 Church of St Michael
and All Angels
11.6.59
GV II*
Parish church. Circa 1200 origins, altered and extended early C14 with
further alterations of late C14 to early C15, chancel rebuilt and shortened
circa 1750. The church was restored in 1835 and again in 1890-91 by Sir
Arthur Blomfield. Part coursed sandstone rubble with ashlar dressings,
part sandstone ashlar and also some tufa. Plain tiled roofs and parapets
with cross finials at gable ends. West tower, three-bay aisled nave with
clerestorey, sanctus bellcote and north porch, north and south transepts
and two-bay chancel with north vestry. West tower: early C14 and of three
stages with moulded plinth band and offsets to upper stages. Angled buttresses
with offsets at west end, Lower stage has restored west doorway with hoodmould
formed by plinth band and, above it, a 2-light window-with a hoodmould. The
second stage has a cusped ogee-arched light on the north, south and west sides;
there is also a clockface on the north side and a loophole on the south side.
The belfry stage has Y-traceried louvred bell chamber openings. The plain
parapet above has finialed corner pinnacles with cusped blind panels in the
sides. The octagonal recessed stone spire was never completed; it has ogee-
arched 2-light lucarnes at its base and a pyramidal roof with a ball finial
and weathervane. The tower stairs are situated on the north-west corner.
Nave: C12, aisles added early C14, the easternmost bay of each aisle was
altered or heightened to form a transept, circa 1400. The main arcades
were also heightened and the former gabled aisles given lean-to roofs.
The nave has three square-headed 2-light clerestorey windows on both sides
and two 2-light wndows in the east wall above the chancel arch. The small
sanctus bellcote is gabled with a cross finial and single pointed archway.
The aisles have angled buttresses at their western corners. The north aisle
has two Y-traceried windows and a 3-light west end window. The south aisle
has two similar windows but they are cusped and flank a four-centred arched
doorway with ballflower mouldings and a hoodmould. At the western end are
the remains of two wall memorials. There is a plain Y-traceried window at
the west end. The north aisle windows flank the gabled C14 north porch, which
has a pointed archway of two orders, and a roof with swept wind-braces and
an arch-braced collar truss above the north doorway; the latter is of similar
detail to the south doorway. The gabled transepts have angled corner buttresses
and large 3-light windows at their gable ends with transoms, reticulated tracery
and hoodmoulds and smaller 3-light windows in their east sides. The north
transept has an ogee-arched doorway beneath the east window and the south
transept has a wall memorial (illegible) beneath its east window, to the
right of which is an ogee-arched squint. Chancel: rebuilt in 1750 and 1890-91.
It has a reset early C14 east window of three lights with reticulated tracery
and a hoodmould. On the south side are two 2-light windows with hoodmoulds
and returns flanking a reset early C14 blocked doorway. On the north side is
attached a mid-C19memorial to James Turberville, died 1839. The lean-to north
vestry has a catslide roof and two square-headed windows on the north side.
Interior: four-bay nave arcades with two-centred arches of two chamfered orders
and octagonal columns. East of the north arcade is an ogee-arched opening to
the former rood loft. Similar C19 chancel arch but with inner order on semi-
octagonal responds on corbels and also with hoodmould. The tower arch is of
three continuous orders. The west wall of the transepts has similar arches
to the arcades but the outer order is continuous and the inner order ends
at the responds. On the inner side of both archways is an ogee-arched
squint. The nave and transepts have wagon roofs with partly renewed moulded
wall-plates. The aisle roofs have swept wind-braces and similar, partly
renwed, moulded wall-plates. The C19 chancel roof has moulded arch-braced
collar trusses. There is the remains of a C14 piscina in the north transept
and also in the east respond of the south arcade with a cusped ogee-arched
head. The octagonal stone font is C14 and has cusped ogee-arched blind panels
on the sides of the basin. The pulpit is C19. In the north aisle is a parish
chest inscribed: "1684 Ex do HB". Memorials: in the north wall of the chancel
is a tomb recess of the early C14 with the reclining figures of a woman and child.
Above is an obelisk-shaped memorial to Rev Josiah Smart died 1769, by T Symonds
of Hereford, a Gothic-style memorial to Henrietta Thorneycroft, died 1844, and
a sarcophagus memorial with a swagged urn relief to Nicholas Mann, died 1811,
by Preece of Hereford. On the south side of the chancel is a brass inscription
panel with a moulded stone surround to John Pember, died 1677, and also another
memorial with a festooned urn relief to Wilson Bewicke, died 1799. There are
also two large illegible memorials at the west end of the south aisle, one of
which is obelisk-shaped and by T Powell of Leominster. Also ledger slabs in
north porch, one to Lily ? , died 1701-2 and several later ones. Glass: east
window by Heaton, Butler and Bayne: (RCHM Herefs II, p 12-15; BoE, p 77).