The King's House and College of Sarum St Michael 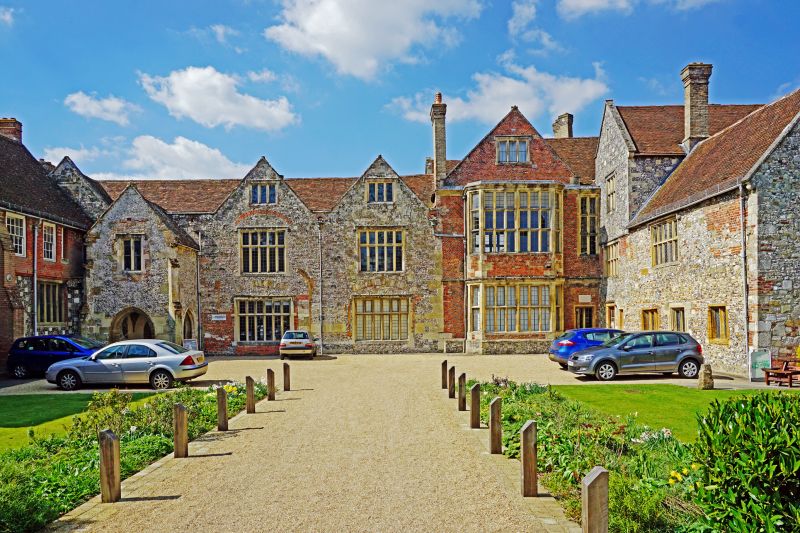 2.
C13/C14 altered C16 and C17 and with elaborate modern additions chiefly on
west side, which have destroyed the character of that front. The east front
is 2 storeys and attic part of rubble stone and flint with stone dressings
and part brick with stone dressings. Old tile roof. The older part of the
house has 3 stone gables each with one 3-light stone mullioned leaded casement.
The left hand gable partly blocked by modern wing to left hand.

In bay next left hand gable is a 2-storey projecting gabled and buttressed
porch with room over. The porch entrance is a C14 or very early C15 moulded
arch, and the porch itself has stone fan vaulting. The inner door is probably
original with planted cusped panel shapes on a ledged oak door, and in a similar
archway. One 2-light mullioned casement to room over porch.
The 2 right hand gables each have large 10-light stone mullioned and transomed
leaded casements on 1st floor and similar 12-light on ground floor. Traces
of older windows visible in this portion which formerly was Great Hall. A
C16-17 extension to right hand is brick with 3-light stone mullioned attic
casement (restored) and 2-storey projecting bay with splayed angles and 30-light
moulded stone mullioned and transomed window on 1st floor and similar 20-light
on ground floor. All leaded lights. One tall narrow similar 6-light window
in right hand comer at upper level and 2-light on ground floor. 4 storey
C16 wing projects at right hand. Irregular casements and door, and modern
additions. All gables have dressed stone copings with small finials.
The west front has a similar gabled portion of brick with large mullioned
window to left hand with date of 1661 on a stone. The remainder of front
obscurred by later work. C19 college extensions on the side include the dormitories
of 1873 and wing with chapel of 1899, the latter with stained glass by Kempe.
Interior: evidence of open hall survives, the east-west entrances are still
in line, that to west now inside house. In room behind porch to north a
Georgian Ionic screen replacing original hall screen. The room has a fine
moulded fireplace as has the room to south of it. The roof structure also
survives with smoke louvre truss, cusped windbraces and is continued to south
with plain windbraces in 2 tiers. To north on 1st floor a room on west side
with C16 plaster ceiling of interlaced geometrical pattern.
The house was the original Prebendal residence of the Abbot of Sherborne.
After the Reformation residence of Thomas Sadler, Registrar to Bishops of Sarum,
who entertained James I here hence the name. The house became a Teacher Training
College for Woman Teachers in 1852 and is described in Thomas Hardy's "Jude
the Obscure".