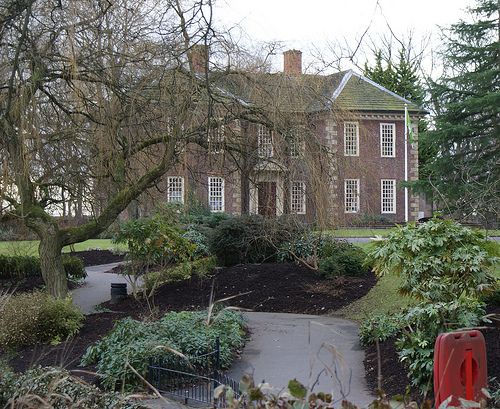 SD 80 SE CHADDERTON FOXDENTON LANE
(south-west side)
6/6 Foxdenton Hall
30/5/63
G.V. II*
House. Between 1710 and 1730 for Alexander Radclyffe but on
a basement which reuses features and stonework from a
building of 1620 for William Radclyffe. English garden wall
bond brick, stone basement and quoins and graduated stone
slate roof. U-shaped plan of 2 storeys (plus basement).
Anglo-classical style. 3 bays with 2-bay wings projecting on
either side. Stone basement with 2-light double-chamfered
stone mullion windows and former door lintel inscribed
"WR1620". Rusticated quoins. Bold modillion eaves cornice
which breaks forward at the central bay both front and rear.
Steep hipped roof with two large rebuilt ridge chimney
stacks. Central entrances to front and rear have panelled
doors, moulded surrounds and pediments on enriched brackets.
6 ground floor and 7 first floor windows to both front and
rear have slightly recessed 28-pane sash windows (many of
which have been replaced by copies). Only one of the 3
original dormer windows exists on the rear roof. Interior:
central room with large bolection-moulded fire surround
gives access to parlour in west wing and stair and kitchen
in east wing. The oak stair has a deep moulded handrail and
turned balusters on a closed string and square newels with
sunk panels. Wall panelling in entrance hall of 1620 and
elsewhere of 1700. Oak ceiling beams. C18 fire places. A
dignified early Georgian house, particularly rare in this
part of the country. C.P. Hampson, The Book of the
Radclyffes. Victoria County History of Lancashire, 1911,
Vol. 5. - - -