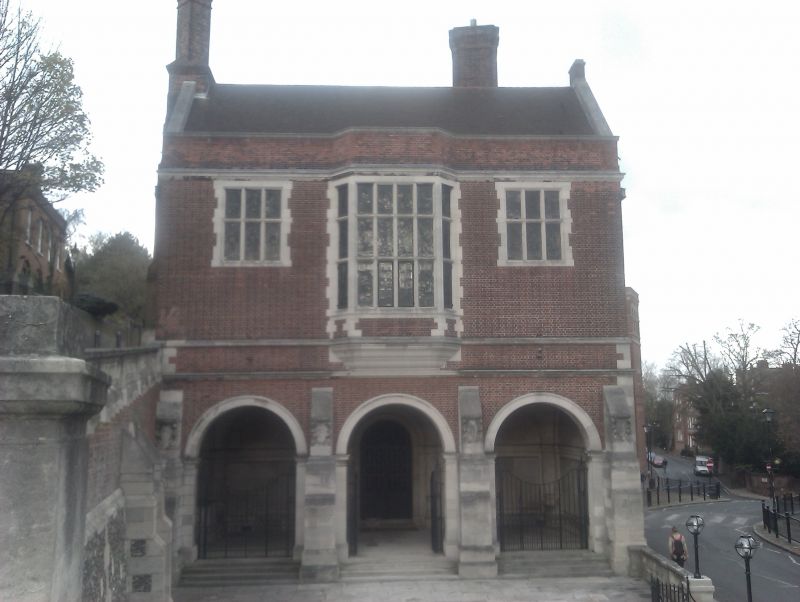 Electoral Ward/Division: Harrow on the Hill

Find accommodation in
Harrow on the Hill

SHRINE: The tripartite, dome-vaulted stone shrine contains in the apsidal west end an ashlar cenotaph (sarcophagus), with ornate sword carved on top, with dedicatory inscription in memory of the sons of Harrow who died in the Great War 1914-1919, and carved wreaths on flanking ends. The walls of the loggia contain panels inscribed with the names of the fallen, each surmounted by a gilded inscription, reading: ‘BE THOU STRONG AND OF GOOD COURAGE BE NOT AFRAID NEITHER BE THOU DISMAYED’/‘BE THOU FAITHFUL UNTO DEATH AND I WILL GIVE THEE A CROWN OF LIFE’/‘REMEMBER THOSE WHO DIED FOR FREEDOM AND HONOUR AND SEE YOU TO IT THAT THEY SHALL NOT BE FORGOTTEN’.

STAIRCASE, FORECOURT AND RETAINING WALLS: double perron of steps from High Street with landing giving access to the higher level of Church Hill. Portland stone balustrading to both streets over retaining walls faced in flint with stone insets. At apex of site where streets converge is a lamp on octagonal base dated ‘MCMXIX’. A rectangular slab milestone is incorporated in the High Street face stating ‘10 miles to London’. Balustraded retaining wall to higher ground of Church Hill at west of forecourt to right of steps with buttress-flanked ashlar niche. Flagged court with circular granite metal-cross-embossed marker at centre (site intended for memorial cross). Decorative metal lamps to High Street entrance.

A dedicated committee for the Harrow War Memorial was formed in May 1917 to raise the sums required. Funds were raised through a mixture of subscriptions and donations, by appeal, and the bequest of Mr J A Apcar. Further contributions (lamps, stained glass, moveable furnishings and terracing) were sought as individual gifts. Lady Fitch funded the Fitch Room. The site was purchased by the school at a cost of £6,975. The construction costs totalled £38,680. The funding committee specified that the Shrine should be considered the war memorial and the wider building only an accessory to this. The Memorial Building was opened by the Prime Minister, the Rt Honourable Stanley Baldwin MP on 3 June 1926. The final sums for the ensemble were recorded in 1931 at £94,000. The losses for Harrovians in the First World War totalled 642.

Sir Herbert Baker FRIBA RA (1862-1946) was employed to design the building and a signed watercolour of the successful proposal was illustrated in The Brick Builder, July 1927. A foundation stone was laid by the Archbishop of Canterbury, a former Harrovian, on 6 October 1921. This was recorded on an inscribed commemorative stone placed on the Grove Hill elevation. The shrine was completed by July 1923 and open to visits ahead of construction of the wider building and staircase. A memorial cross, detailed in Baker’s watercolour of 1920, in front of the shrine, although rendered as a model, was found wanting and the decision was made to divert the funds previously allocated for it to the wider building. The intended site is marked with a cross-embossed roundel in the stone-flagged forecourt. The narrow site, between differing road levels, was challenging, but Baker’s design was carefully articulated to create a masterful solution. The demolition of the previous buildings on the site and creation of a ceremonial forecourt, retaining wall with niche and double perron staircase (all balustraded), enhanced the setting of the Old Schools which flanked the Memorial on higher ground to the south-west. The addition of a terrace at the north end of the building also improved the approach to the Speech House (William Burges, 1872) to the north-east.

Lady Fitch funded the outstanding decoration of the room above the Shrine in memory of her son, Alexander Fitch. Elizabethan panelling and fittings were brought in from Brooke House, Hackney, including an ornate stone fireplace from the reign of Henry V with carvings from the period of Henry VII. The teak boards used for the floor were acquired from HMS St Vincent, built at Plymouth in 1815. Here too, she required that a lamp, placed over the chimneypiece, be kept lit constantly in honour of the memory of her son and all fallen soldiers.

During the Second World War, Harrow was declared a neutral zone with no requirement to evacuate children. The basement of the War Memorial Building was used as the Air Raids Precautions Wardens Post for the school, heavily reinforced with steel joists and columns which were mostly removed in a refurbishment of 2014.

The school currently (2017) uses the building both for school functions and for hire, with the tailored Masters’ Room on the upper floor regularly occupied during breaks.

The War Memorial Building, Shrine, Ceremonial Staircase and Retaining Wall at Harrow School, built in 1921-26 to the design of Sir Herbert Baker, are listed at Grade II* for the following principal reasons:

* Architectural interest: as an ingenious design for a complex site, articulating the available space to create a key building with appropriate ceremonial foreground;

* Materials: built with fine materials, ashlar, ironwork and joinery, to provide a respectful and handsome shrine, memorial and forecourt with the inclusion of C15 and C16 fittings from Brooke House and the boards from HMS St Vincent, 1815;

* Architect: designed by one of the early C20's outstanding architects, a major designer of exceptional buildings in Africa, India, for the Imperial War Graves Commission in Europe and commissions in Britain;

* Historic interest: for the inclusion of the symbolic light that may never be extinguished in the Alex Fitch Room, a flame in honour of the fallen whose memory lives on and as a fine example of a substantial memorial, in large part funded by subscription, from a public school to its 642 alumni whose lives were taken in the First World War;

* Group value: with the Grade I Old Schools, Grade II* School Chapel, Vaughan Library and Speech Room and Grade II Church House, prominent on the main artery through the school estate and Harrow-on-the-Hill.