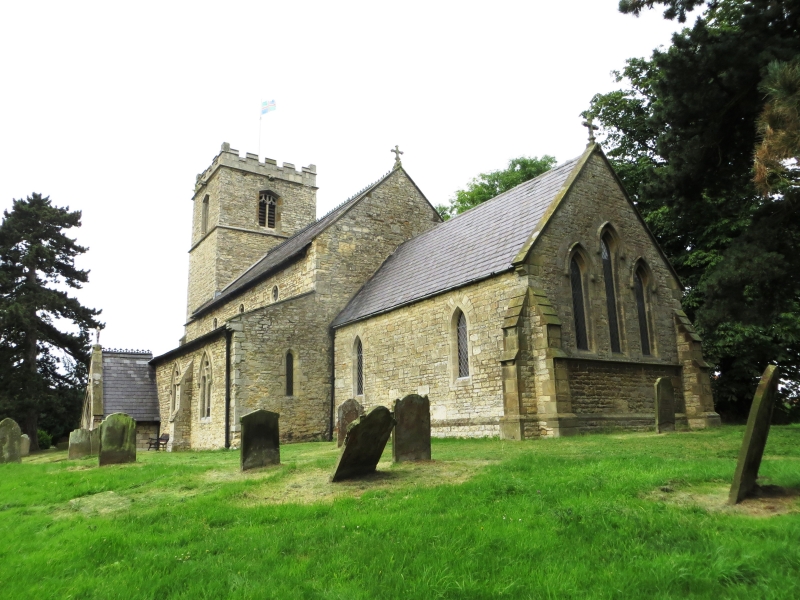 Parish church. C13, C15, restoration c.1860 by James Fowler.
Coursed limestone rubble with ashlar dressings, slate roofs with
decorated ridge tiles having stone coped gables with C19 crosses
fleury. West tower, nave, chancel, north and south aisles,
south porch and vestry. The 3 stage tower has a moulded plinth
and 2 chamfered string courses rising to embattled parapet. The
west wall has stepped set back buttresses to 1st stage only, a 2
light C19 window and clock above. To belfry stage on all 4 sides
are C15 double lights with deep chamfered reveals and pointed
heads under 4 centred arches. The north side has a C15 4 centre
arched headed doorway to the tower stair which rises up in the
north east angle. The north aisle, which has a plinth, has a
single C19 lancet to the west wall. In the north side are C19
2 light windows and a blocked early C13 pointed doorway with
simply moulded imposts and chamfered hood would. The eastern
aisle window is late C13 with 2 lights and trefoil over in a
chamfered surround having hood mould and one surviving human head
label stop. The clerestorey has 3 C19 cusped lights in circular
frames. On the north side of the chancel is the C19 vestry
which contains a single contemporary lancet. The east wall of
the chancel has 3 C19 stepped lancets with hood mould and shield
label stops. The south side of the chancel has 2 C19 lancets.
The east and west walls of the south aisle contain C13 lancets.
Reused as a quoin on the east wall is the head of a late C13
cross fleury tombstone. The south wall has 2 C19 paired lights.
The clerestorey matches the north side but to the south east
angle of the nave is a C19 round chimney resting on a square
base. The C19 south gabled porch has a moulded outer arch with
leafy label stops. The south doorway is a heavily restored C13
opening with nook shafts having conceptual foliage capitals, a
double roll moulded head, the inner order continues down the
reveals, the outer order is of dog tooth decoration. Interior;
the early C13 3 bay arcades have double chamfered arches with
quatrefoil keeled piers and responds, and annular capitals. The
arches have simply chamfered hood moulds with C19 leafy label
stops. The C13 tower arch has 2 chamfered orders dying into the
responds. To the south east angle of the nave is the head of a
blocked niche. The C13 chancel arch of 2 chamfered orders has
keeled responds, foliate and hob nailed capitals with C19 bases.
The roofs, and all fittings are C19, note the interesting
latticed and arched iron screen to the tower.