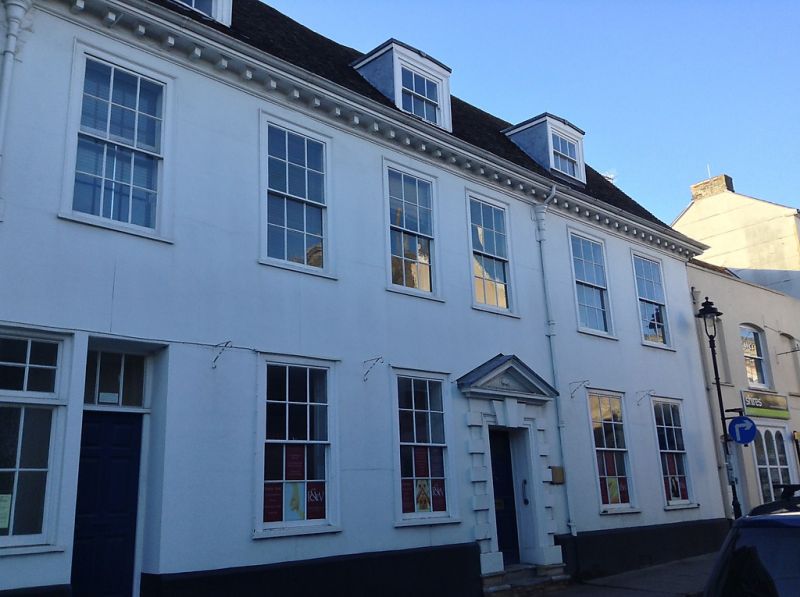 Entry Name: 88 and 88a, Guildhall Street

House, now offices. C17 and C18. Timber-framed and rendered
with a plaintiled roof and wood modillion eaves soffit.
EXTERIOR: 2 storeys, cellar and attics. 6 windows to the upper
storey, all 12-pane sashes in flush cased frames. 4 similar
sashes to the ground storey with no glazing bars to the lower
sashes. 3 segmental-headed lead covered dormers have 6-pane
sash windows. The central 6-panel door is recessed and up
steps; doorcase with panelled reveals has a Gibbs surround
with rusticated architrave and pediment.
At the south end, a plain recessed doorway and adjoining
heavily framed casement window with upper light. A long rear
timber framed and rendered wing of 2 storeys and attics with a
pantiled roof has a range of four 16-pane sash windows in
flush case frames and 3 gabled dormers along its north side.
INTERIOR: a small front cellar and larger rear cellar each
have walling of stone, flint and random brick. The front range
is in 2 phases, with the left side apparently linking with the
rear wing and the right side of later date. The room to the
right of the entry has a moulded wood modillion eaves cornice
and an ornate plaster centre-piece to the ceiling, which is on
a higher level than the rest of the ground storey. The
entrance hall has limestone flags with black dots and
indications that the stair has been resited. It now leads off
one side of the hall: turned balusters, plain handrails,
closed strings. A further flight of stairs leading to the top
storey has C19 stick balusters and a ramped handrail.
To the left of the entrance the layout has been interrupted by
the resiting of the stair, but full height bolection-moulded
panelling remains in one ground storey rear room and on the
upper storey several rooms have the remains of
bolection-moulded panelling to dado height. Some timbers are
exposed in the rooms at the west end of the wing.