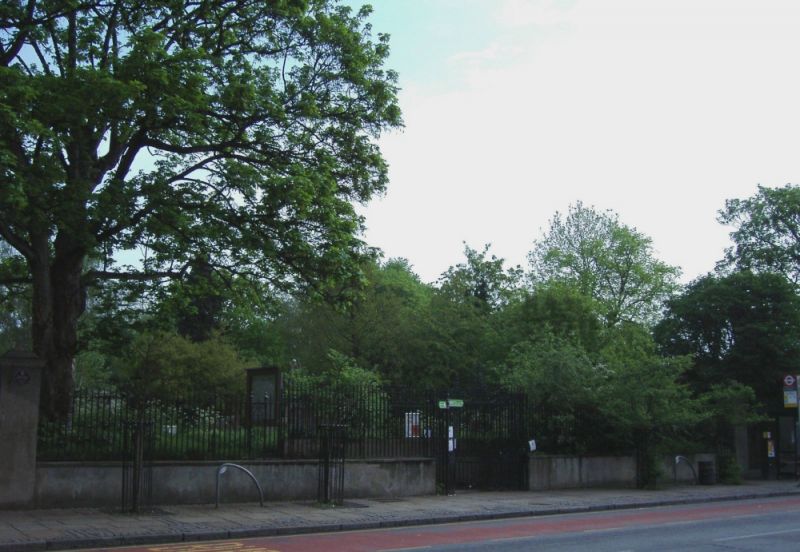 C18 walls and gate-piers. The railings and gate, originally C18, but probably lost during the Second World War, were restored in about 1982 to the original design. The later C20 brick wall and steps attached on the north side is not included.

C18 walls and gate-piers. The railings and gate, originally C18 but probably lost during the Second World War, were restored in about 1982 to the original design.

MATERIALS
A mixture of red and yellow brick walls in either Flemish or header bond, with stuccoed piers and walls below railings, cast iron gate and railings and stone ball finial (the surviving one of two).

DESCRIPTION
The central cast iron gate has a dog rail, scrolled mid panel, scrolled side panels above this and an elaborate scrolled overthrow. This is flanked by low stuccoed walls with cast iron spear railings with urn finials at intervals and central scrolled panels ending in square stuccoed piers with moulded cornices and a stone ball finial to the eastern pier, the one to the western pier missing at the time of survey. Attached to the piers are curved sections of brick wall in header bond with some upper parts renewed, terminating in straight sections in Flemish bond also partly renewed.

The later C20 brick wall and steps attached on the north side are excluded from the listing.

Abney Park Cemetery was opened in 1840 and laid out by William Hosking on the grounds of two earlier private houses.

Fleetwood House, completed in 1635 for Sir Edward Hartopp, had become a Quaker Girls School by the 1820s. Abney House was built on adjoining land to the west of Fleetwood House for Thomas Gunston (1674-1700) but passed to his sister, the wife of Sir Thomas Abney (1640-1722) a Lord Mayor of London. From 1722 onwards the recently widowed Lady Mary Abney laid out a park, assisted by Dr Isaac Watts and the neighbouring Hartopp Family. In about 1838, Abney House became a Wesleyan seminary but it was demolished in 1843 and its materials used elsewhere.

A London Borough of Hackney plaque on the western gate pier states that this was the gateway to Abney House which stood here between 1700 and 1843 and that Isaac Watts, the non-conformist pastor and hymn writer, stayed at the house between 1734-1748.

A 1930 photograph in the London Metropolitan Archives shows the gate and a small section of railings on either side.

A map of Second World War Bomb damage in London shows that a parachute bomb landed nearby in Bouverie Street and one close to Fleetwood Street. A government order of 1941 authorised the compulsory requisitioning of all post-1850 iron gates and railings for the war effort and it is possible either that the gate and railings may have been commandeered for the war effort or much damaged during the war and restored afterwards.

A further photograph in the London Metropolitan Archives dated 1982 is catalogued as 'Abney Park Cemetery: railings and gate (restored)'.

The walls, railings and gates at the south end of Abney Park Cemetery were listed in 1953.

The walls, gate-piers, railings and gate at the south end of Abney Park Cemetery, the only surviving structure belonging to the demolished C18 Abney House, are listed at Grade II for the following principal reasons:

Architectural interest:
* As a pre-1840 symmetrical entrance to a large detached house in varied brick bonds, including both curved and straight sections, stucco and stone. The cast iron railings and gate were restored to the original C18 pattern with elaborate overthrow and scrolled panels following their loss during the Second World War.

Historic interest:
* As the only remaining subsidiary feature to C18 Abney House where Isaac Watts, the non-conformist pastor and hymn writer, lived between 1734 and 1748.

Group value:
* With a number of listed structures within Abney Park Cemetery, which is on the Parks and Gardens Register at Grade II and listed properties in Stoke Newington Church Street.