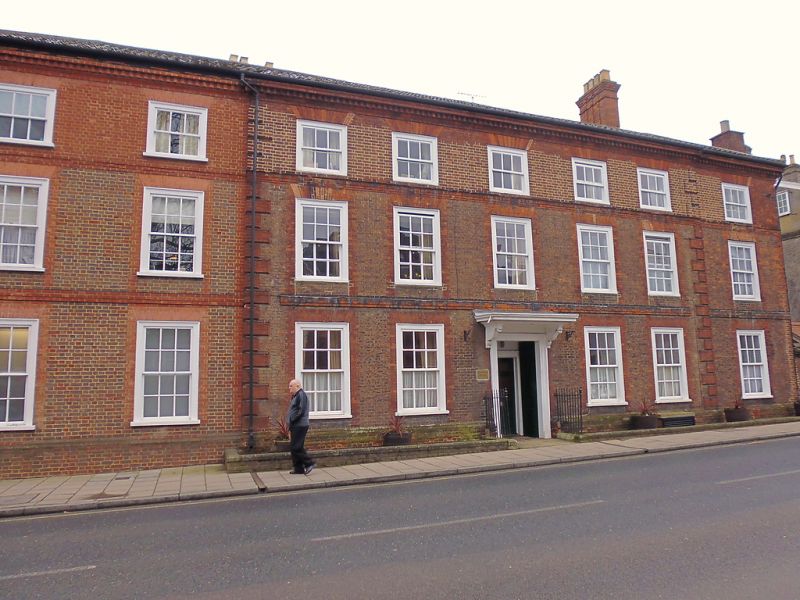 House, now a retirement home. C16 and C17 with an early C18
front and later rear wings. Timber-framed, encased in brick.
Front in 2 shades of red brick, principally in Flemish Bond
but with narrow sections of English Bond between the windows;
black glazed pantiled roof in 2 main parallel ranges. Raised
brick bands between the storeys, chamfered rusticated brick
quoins to the main part of the building and a moulded brick
dentil eaves cornice. On the right the end bay is slightly set
back.
EXTERIOR: 3 storeys and cellar. 6 window range: all 12-pane
sashes in broad moulded cased frames. A 6-panel door set in
panelled deep reveals has a wood doorcase with a moulded
architrave and a dentilled cornice hood on enriched console
brackets. An extension of the 1980s at the north side is in
matching style and has a 2-window range.
At the rear, 2-storey wings to north and south with a
parapeted wall between them concealing a central gabled wing.
The south wing continues in the same style of brickwork as the
end bay of the front, with a moulded and dentilled brick
cornice, and ends in a large 2-storey canted bay with 3 long
12-pane sash windows in flush cased frames to each storey.
The north wing ends in a rendered semicircular bay with a
delicate wood dentil cornice above the ground storey windows.
2 internal chimney-stacks have panelled shafts.
INTERIOR: cellar below part of rear is lined with flint and
stone. 2 round columns against the front and back walls and 3
roll-moulded arched openings, one probably for a doorway, are
all in Norman style; a wide blocked arch or doorway in the
front wall has a moulding which may be C14: all these seem to
be re-used Abbey stone.
The entrance hall has a bolection-moulded dado and a late
C17/early C18 dog-leg stair with landing balustrade:
vase-on-reel balusters, closed strings, square newels and wide
moulded handrail. To the right of the hall the ground storey
room has a main beam with a complex late C16 roll-moulding and
one moulded trimmer, but otherwise mainly early C18 features:
internal shutters with raised fielded panels, wooden box
cornices, bolection-moulded dado with applied plaster
decoration. To the left of the hall a room with complete
bolection-moulded panelling and a fireplace surround with
Tuscan overmantel, panelled pilasters and 2 panels for
paintings.
Along the north wall are fitted original bookshelves with
matching panelling and mouldings. The interior of the south
wing was remodelled in the early C19: shutters with applied
panels, heavy moulded plaster cornice, marble fireplace. The
C17 north wing has plain cross-beams exposed on the ground
storey. The 2nd storey is an addition.