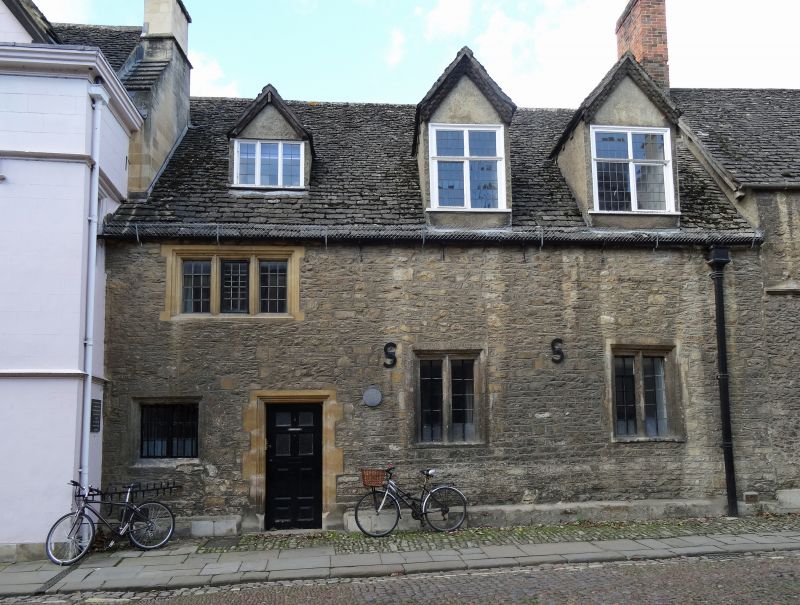 MERTON STREET
1.
1485
(North Side)
Beam Hall, with No 3
(Formerly listed as
Beam Hall)
SP 5106 SE 9/465 12.1.54.
II* GV
2.
RCHM 79. Built in 2 sections, that on the East being built as a Hall, in
C15 and that on the West about 1600; the -latter was altered in Cl8 and in
1885. The East range. The south front is recessed from the West range
by about 3 ft and is of lower height. 2-storeyed pilastered rubble with
cellars and a stone slate roof in which 3 Cl7 gabled attic dormers, the two
on the East being larger than that on the West; the East one has moulded
barge-boards and in the West is a 3-light casement window in a modern stone
frame. In the ground floor are 2 original 2-light stone caveto-moulded mullioned
windows with square heads, and 1 small window in a moulded stone frame.
At the west end in the 1st floor, which was inserted probably about 1600,
is a 3-light stone mullioned window in a moulded frame. The West range
is of 2 storeys with cellars and 4 gables in which are attics. The front
was restored in 1885 by sir T G Jackson and is now cement-faced with imitation
masonry joints. There is a continuous moulded string over the ground and
1st floors and a moulded cornice below the gables. The ground floor has
2 3-light stone mullioned windows and 2 similar but larger windows with sashes,
all with square moulded labels. In the lst floor are 1 3-light and 2 2-light
stone mullioned windows with a projecting bay of 3 lights with sashes. The
4 windows in the 4 gables have 3-light casements. There is a moulded flat
wooden bracketed hood to the doorway. On the East is a stone-based stack
with a modern brick shaft and the roof is of modern tiles. Interior. RCHM
p 166 b. Includes in the East block the original roof timbers, and early
Cl7 staircase, a C17 fireplace and some C16-17 panelling. For drawing of
exterior by J C Buckler in 182l, see MS Bodl Don A 3 1 52. Major
alterations 1964.

Beam Hall and Nos 3, 4A and 5 from a group with New Block, Corpus Christ
College and Oriel College.