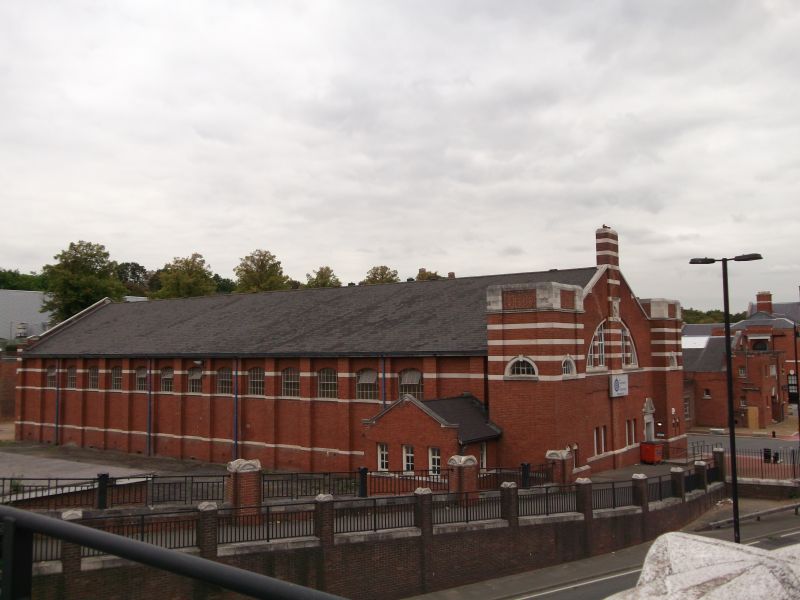 EXTERIOR: single storey; sixteen bay side range. North entrance gable end has large square clasping buttress towers to a coped gable with central lateral stack, plinth/cill band, and upper cill band. The corner towers have small round-arched windows to the base, upper stage has keyed lunettes with architraves beneath ashlar bands, cornice and parapet with ashlar corners. Gable has outer doorways with keyed architraves and steep pediments to panelled doors, paired flat-headed inner windows, and a central lateral stack extending up through a large upper lunette, with bands to the stack and outer mullions; a relief panel to the stack has an anchor and rope. South coped gable has a large lunette with four banded mullions, and clasping buttresses. Sides have plain buttresses between upper segmental-arched windows and impost band, and lower west aisle range with three entrances with bracketed canopies and raised parapets behind, with gabled end blocks.

INTERIOR: not inspected but noted as having a large gymnasium with wooden floor.

HISTORY: with the adjoining swimming pool (qv) evidence of attempts to raise the physical quality of the late C19 navy. Part of a fine group of naval barracks buildings including the Captains' House, mess block, barracks and canteen (qqv).