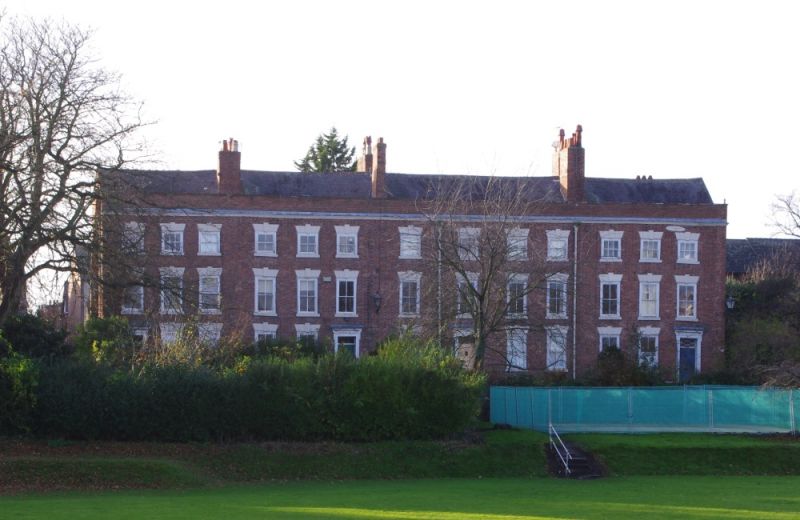 Terrace of 4 town houses. Late C18. For leaseholders from the
Dean and Chapter of Chester Cathedral. Flemish bond brown
brick with grey slate roof.
EXTERIOR: 3 storeys; 13 windows to upper storeys. 2 stone
steps on partly brick risers to doors of 6 flush panels with
plain overlights in timber cases with eared architraves, plain
friezes and moulded cornice hoods. Flush sashes with painted
stone sills and rusticated wedge lintels with false keystones.
The first storey from north, has door and 2 windows to No.3, 2
windows, door and one window to No.4, door and 2 windows to
No.5 and 2 windows and door to No.6. An unbroken vertical
joint between Nos 5 & 6. Nos 3, 4 & 5 have 4-pane sashes to
each storey except third storey of No.3 which is 6-pane; No.6
has glazing bars removed from first and second storey and
6-pane sashes to third storey. Painted stone cornice beneath
brick parapet with plain stone coping. Iron rainwater pipes
and heads. The north end wall of No.3 is rebuilt, C20 with one
13-pane sash each to the first and second storeys and a 6-pane
sash to the third storey. 3 chimneys in front of ridge and 4
behind it. The rear has irregular fenestration, largely
small-pane flush sashes.
INTERIOR: No.4 has doors of 6 fielded panels, panelled
embrasures with shutters, cornices, a good open-string stair
with shaped brackets, 3 column-on-vase balusters per step,
swept handrail with rose, turned lower storey newels and
square newels to upper storey. Third storey doors of 4 fielded
panels.
No.5 has cellar with sandstone rubble south, east and west
walls and brick north wall; stone cellar steps, doors of 6 and
4 fielded panels; embrasure benches and shutters; cornices.
Open-string stair of one flight per storey has open string
with brackets, curtail step; 3 column-on-vase balusters per
step, swept rail with rose and dado rail. Doors have HL hinges
and old latches; the second-storey rear room has a good
cast-iron fireplace in carved wood surround; a good fireplace
in third storey front room and a modest one in the back room;
one door of 2 fielded panels; cornices removed in third
storey.
The interiors of Nos 3 & 6 could not be inspected but probably
have features similar to those in Nos 4 & 5.

HISTORICAL NOTE: the terrace is shown on the map of Chester
surveyed by Weston and published by James Hunter in 1789.
(Weston: Map of Chester: Chester: 1789-).