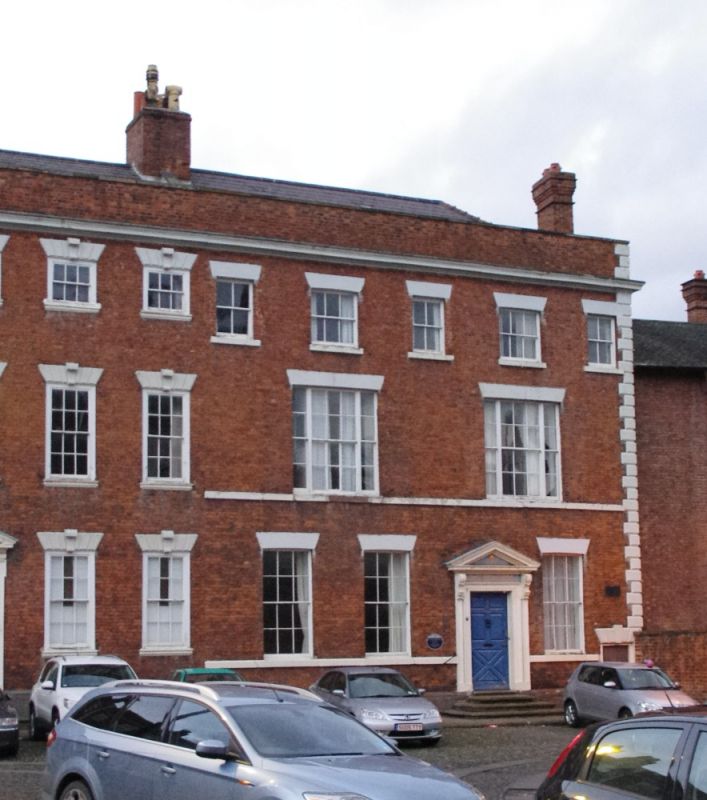 Town house, now Church of England Retreat House. c1760, a
little later than Nos 7-10 (qv). The house was developed on a
lease, probably of 40 years, from the Dean and Chapter of
Chester Cathedral. Flemish bond orange brick with grey slate
roof.
EXTERIOR: 3 storeys and cellar. Painted stone plinth;
boot-scraper by 4 apron steps of stone to door of 4 fielded
panels above a large panel incised with St Andrew's cross in
case of painted stone with eared architrave flanked by
panelled pilasters carrying pediment on acanthus consoles; PAX
HUIC DOMUI; SIT PAX INTROEUNTI; SIT IN HAC HABITANTI; SIT ET
EUNTI PAX is painted on the frieze, and on the pediment the
Diocesan arms dated 1925. Boarded door to basement, east,
under rusticated wedge lintel with false keystone;
first-storey sillband; rusticated quoins to the east corner.
The first storey has 2 recessed 12-pane sashes west of the
door and one crowded between entrance and basement door; the
second storey has 2 tripartite sashes of 4;12;4 panes,
inserted; the third storey has 3 recessed 6-pane sashes in
square openings; the first and second storeys have painted
stone sillbands and the third storey has painted stone sills;
all have plain wedge lintels. Painted stone cornice beneath
brick parapet with plain stone coping.
The rear with a semicircular bow has 3 recessed sashes per
storey, all unequal, of 15 panes to first and second storeys
and 9 panes to the third storey; second and third storey
sillbands of painted stone; plain wedge lintels; hipped roof.
INTERIOR: the interior could not be inspected fully, but
features are noted to be intact. The hall has a panelled
embrasure with shutters. The open-well open-string stair in
Chinese style is similarly detailed to that in No.7 (qv) with
'Chinese Chippendale' balustrade, shaped brackets, curtail
step with rose, swept rail, bolection panels to stairwell,
probably of plaster, and a domed lantern.
SUBSIDIARY FEATURES: the damaged rear garden wall is of