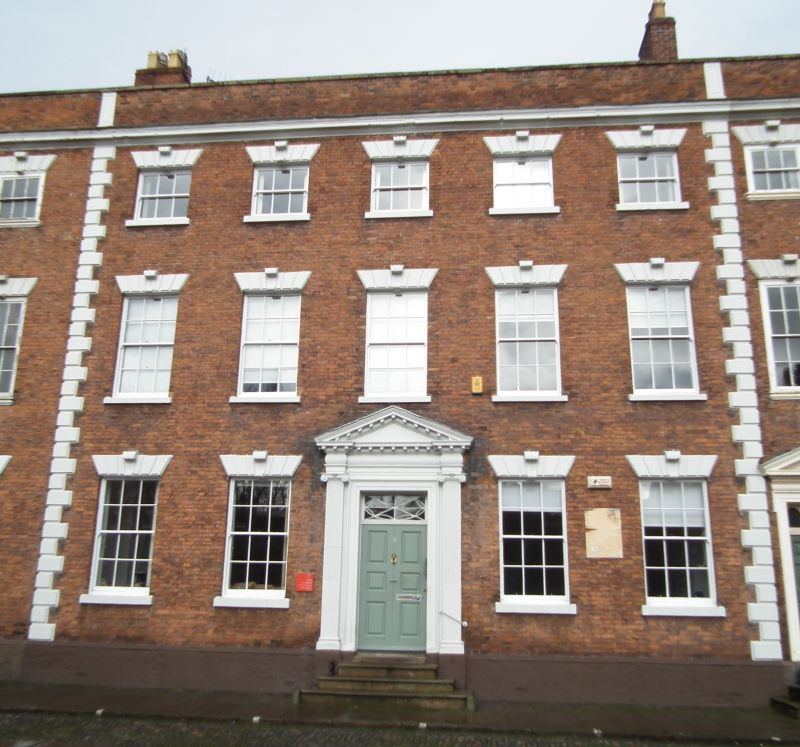 Town house now offices. 1754-60. For Thomas Prescott on a
40-year lease from the Dean and Chapter of Chester Cathedral.
Flemish bond orange brick; grey slate roof.
EXTERIOR: 3 storeys and cellar; double-fronted. Painted stone
plinth and rusticated quoins. A boot-scraper by 4 apron steps
of stone to door of 6 fielded panels with overlight having
radial and looped elliptical bars in painted stone case with
fluted Ionic pilasters and pulvinated frieze and modillion
cornice to pediment. 2 recessed 12-pane sashes to each side of
the door, 5 similar sashes to the second storey and 5 of 6
panes in square openings to the third storey; all have painted
stone moulded sills and rusticated wedge lintels with ornate
false keystones. Painted stone cornice beneath brick parapet
with panelled end-blocks and plain coping of stone; no
external rainwater pipes; 2 ridge chimneys, that to west
shared.
A rear wing, west, of 2 storeys and, east, of one storey. The
rear fenestration is altered; 2 flush 12-pane sashes in the
third storey.
INTERIOR: the hall has tiled floor patterned in black and
white, dado, cornice, architrave to front door, cornice and
panelled pilasters to basket archway to stair hall. Cellars
have sandstone front and back walls and a brick barrel-vault;
a broad-board cellar door. The first storey has doors of 6
fielded panels. The west front room has architraves to
embrasures and a 2-panel door to cupboard. The east front room
has panelled embrasures, frieze and cornice. The stair hall
has basket archway to rear on panelled pilasters. The good
open-well open-string stair has carved brackets, curtail step
with rose, 3 spiral-mould column-on-vase balusters per step,
swept moulded rail, dado of broad boards rising with stair,
under a moulded rail with bolection panels above; an octagonal
domed lantern. The second storey landing has broad
basket-arches to west and rear, bolection panels and doors of
6 fielded panels. The west front room has architraves and

consoles to blocked archway to east front room, carved
spandrels and key; architraves to shuttered embrasures, a
frieze, cornice and ceiling rose. The east front room has
panelled embrasures, blocked chimney-breast and a cornice. A
secondary stair has surfaces covered between first and second
storeys, 3 closed-string flights to the third storey with
steps covered, 3 column-on-vase balusters per step, turned
newels and straight rails. The third storey is relatively
plain.
SUBSIDIARY FEATURES: the rear garden has terrace walls of
brick and stone; the rear wall to the garden has a probably
pre C18 stone plinth, a Gothick ogee-arched opening, with arch
of 2 S-shaped stones, and a plain stone coping.
(Burne RVH: Chester Cathedral: London: 1958-: 218-20).