Numbers 7 and 8 and Attached Walls 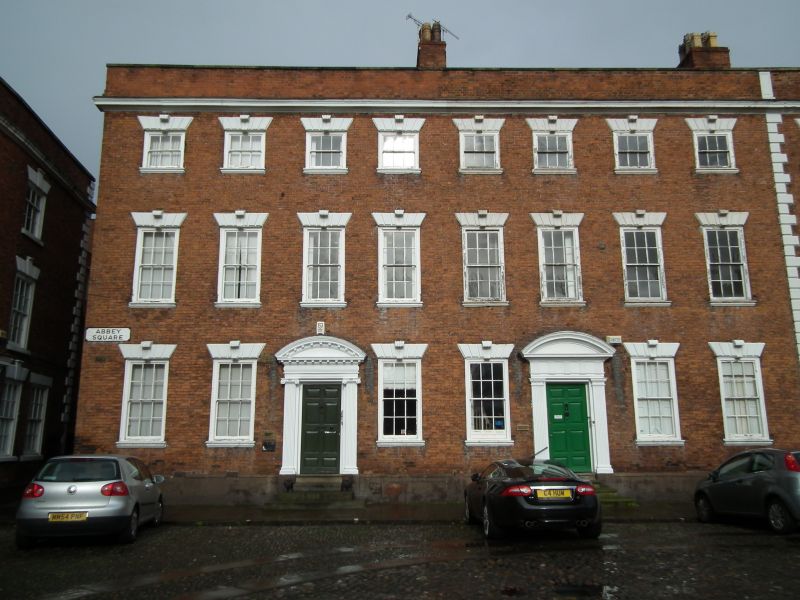 2 town houses, No.7 now with dental surgery and No.8 offices.
1754-60. For Mascie Taylor and Robert Taylor on 40-year leases
from the Dean and Chapter of Chester Cathedral. Flemish bond
orange brick with grey slate roof.
EXTERIOR: cellars and 3 storeys. Painted stone plinth. No.7
has 4 apron steps of stone to door of 8 fielded panels in
Ionic case of painted stone with fluted pilasters, pulvinated
frieze and segmental pediment with modillions; No.8 has
similar steps, door and Roman Doric doorcase. Each house has
two 12-pane flush sashes to the first storey, 3 similar sashes
to the second storey and 3 of 6 pane in square openings to the
third storey; all have moulded sills of painted stone and
rusticated lintels with ornate false keystones; painted stone
cornice and brick parapet with plain stone coping. No.8 has a
Sun Insurance plate. No external waterpipes. A ridge chimney
and a shared chimney, east. The west side of No.7, to the
Little Abbey Gateway passage, has a flush sandstone plinth,
perhaps pre 1750, two windows under cambered brick heads to
the first storey and a flush 6-piece sash to each upper
storey. The rear has flush sashes under cambered brick heads,
those to the lower storeys having shaped "keystones" of
painted brick.
INTERIOR: the houses, as Nos 9, 10 & 11 (qv), have good
features including the stairs. No.7 has patterned tile floor
to hall, doors of 6 fielded panels, front room with one row of
broad panels beneath the dado rail and a row of tall panels
above it, panelled shuttered embrasures, a panelled
basket-arched alcove, dentil cornice and ceiling rose;
overmantel removed. The rear room has fire surround with
pilasters and an upper mantel on 4 vase pilasters, a festooned
frieze and ceiling cornice; the altered rear window in a round
bay has panelled shutters; ceiling rose. 2 arches to stair
hall with pilasters and pier in Chinese manner; good Chinese
open-well stair in panelled well with domed rooflight;
cornices. The second storey has doors of 6 fielded panels. The

front west and east rooms have a blocked connecting archway
with pilasters; panelled embrasures, a marble fireplace and
cornices; the rear rooms have panelled embrasures with a bench
and cornices. The third storey has doors of 4 fielded panels,
panelled embrasures with benches and a simple fireplace; attic
with trusses of hipped roof.
The hall of No.8 has patterned tile floor and plaster cornice;
doors of 6 fielded panels; the inner face of the front door is
boarded; a pilastered archway to the rear. The stair has 4
steps with wreaths to each side of curtail; 3 column-on-vase
balusters per step, open string with carved brackets and swept
rail. The upper storeys have doors of 5 fielded panels. The
second storey front room has architraves to embrasures,
fireplace, frieze and cornice. Other rooms could not be
inspected. The dogleg stair to the third storey is offset and
similarly but more simply detailed than that below.
SUBSIDIARY FEATURES: the brick garden wall, attached to the
rear, between 2 and 3m high, has 4 stone steps to a diagonally
boarded 4-panel door in the west side. The sandstone plinth
along the north side may be pre 1850; blocked doorway; plain
stone cap.
(Burne RVH: Chester Cathedral: London: 1958-: 218-20).