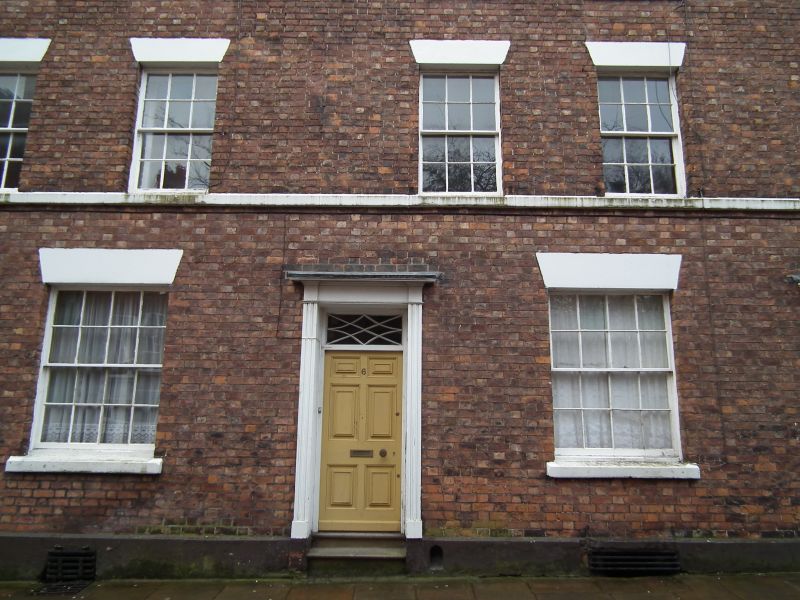 Row of 4 small town houses. 1826-8. For Mr Thomas of King
Street, Chester as sub-lessor of the prebendal land of Rev.
James Thomas Law. Flemish bond brown brick with grey slate
roof.
EXTERIOR: cellars and 3 storeys. Painted sandstone plinth;
stone steps to doors of 6 margined panels with overlights
glazed in pattern of convex lozenges on saltires in timber
cases with fluted pilasters, plain friezes and cornice hoods;
painted stone sills and wedge lintels; sashes are recessed,
one of 16 panes to first storey of each house, sillband to
second storey which has 2 sashes to each house; two 9-pane
sashes to third storey of each house; painted stone cornice; 2
west gable chimneys, 3 chimneys before the ridge and 3 behind
it. Miscellaneous fenestration on west gable-end. Single
storey monopitch-roofed rear outshuts; 12-pane flush sashes to
second storey and 9-pane flush sashes to the third storey,
that to No.10 having glazing bars removed from lower leaf. A
late C19 second storey window proud of wall, on brick
corbelling, in east gable end.
INTERIOR not inspected.
HISTORICAL NOTE: Prebendary JT Law, resident at Nos 1 and 2
Abbey Square (qv), engineered this development on land
previously occupied by his stables, to the displeasure of Dean
and majority of Chapter.
(Burne RVH: Chester Cathedral: London: 1958-).