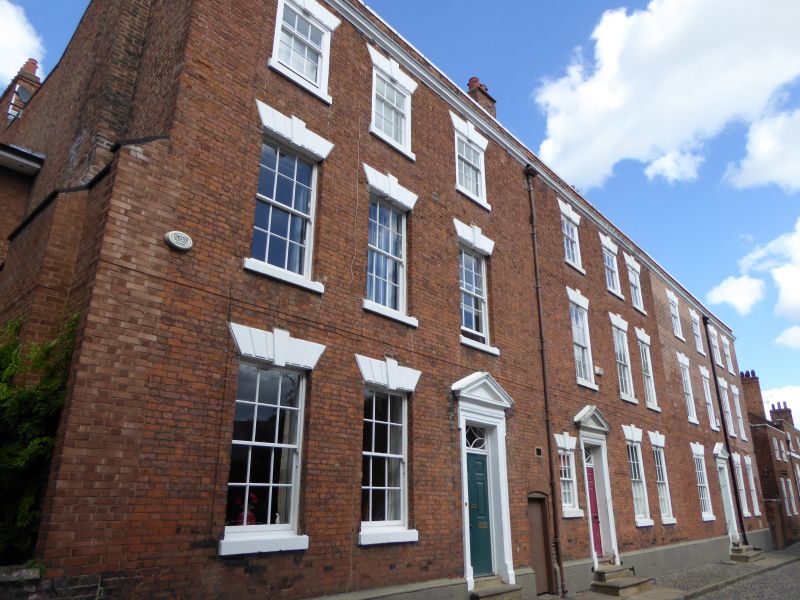 Terrace of 3 town houses. Nos 5 & 7 dated 1764. Brown brick
with grey slate roof. No.11 adjoins the rear of No.9.
EXTERIOR: 3 storeys; Nos 5 & 7 have 3 windows each, No.9 four,
to each upper storey. Painted stone plinth. Nos 5 & 7 have 3
apron steps, No.9 four, of stone to doors of 6 fielded panels
with overlights in painted stone cases with eared architraves,
pulvinated friezes and triangular pediments. The overlights to
Nos 5 & 7 have patterned glazing of a concave lozenge in an
ellipse; No.9 has a pattern of 4 quadrants and 2 semicircles
in the 12-pane margin to 2 central panes. Flush sashes with
painted stone sills and rusticated wedge lintels, 2 of 12
panes to Nos 5 & 7, and 3 of 12 panes to No.9, No.5 also
having a boarded rear access door and No.7 a probably inserted
small 12-pane sash, detailed as the other windows. The second
storey sashes have 12 panes and the shorter third storey
sashes 9 panes. All sashes to No.5 are replaced, with horns.
Painted stone cornice beneath a 4-course brick parapet with
simple stone cornice. Chimney before ridge between Nos 5 & 7,
ridge chimney between Nos 7 & 9 and gable chimney to No.9.
Vertical brick joint between Nos 7 & 9 which has higher roof;
rainwater pipe and head between Nos 5 & 7 is dated 1764 on top
butterfly bracket.
The rear of No.5 has a low rear wing, west, and 2 altered
first storey sashes, 3 flush 12-pane sashes with gauged brick
arches and keystone to the second storey, plus an inserted
8-pane sash; a flush 6-pane attic window in the rear table.
No.7 has an added 2-storey canted bay with altered lower
window; three 12-pane flush sashes to the third storey have
gauged brick arches; a small 2-pane light in gable to attic.
No.9, extended as No.11, to rear, later C19 and C20, has flush
sashes, west, to upper storeys.
INTERIORS could not be inspected.
HISTORICAL NOTE: the houses were built by leaseholders from
the Dean and Chapter of Chester Cathedral.