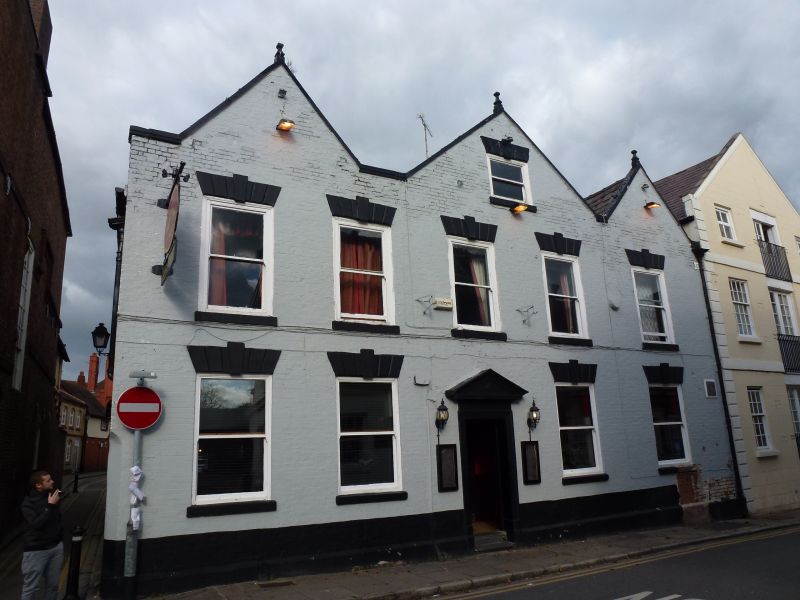 Public house incorporating elements of the town house of
Humphrey Ball, Sheriff of Chester in 1469. The present
building is C17 and C18 externally. Flemish bond painted brick
to front and irregular bond brown brick to west side facing
Bunce Street; grey slate roofs with 3 parallel ridges, gables
to Castle Street.
2 storeys plus attics. Painted stone plinth; 2 steps to door
of 6 fielded panels in timber case with architrave, frieze and
pediment; replaced 2-pane horned sashes, 2 to each side of
doorway and 5 to second storey; a 4-pane sash in the central
gable; the sashes are flush. Lead rainwater pipe and head
dated 177... at east end. The gables have stone parapets with
finials of late C17 character. 2 brick chimneys on west ridge,
one on east ridge.
The west side has late C19 window openings with 2 recessed
2-pane sashes and three 1-pane lights to first storey and
leaded casements to the second storey; the rear refaced
probably late C19.
INTERIOR: much altered. The first storey east front room has
ceiling with cross-beam with chamfers stopped at each end and
to each side of centre; the soffit has empty mortices, one at
centre and 3 east of centre; 6 stop-chamfered joists of large
section to each side of the beam. The rear east room has a
corner post and 2 probably repositioned beams.