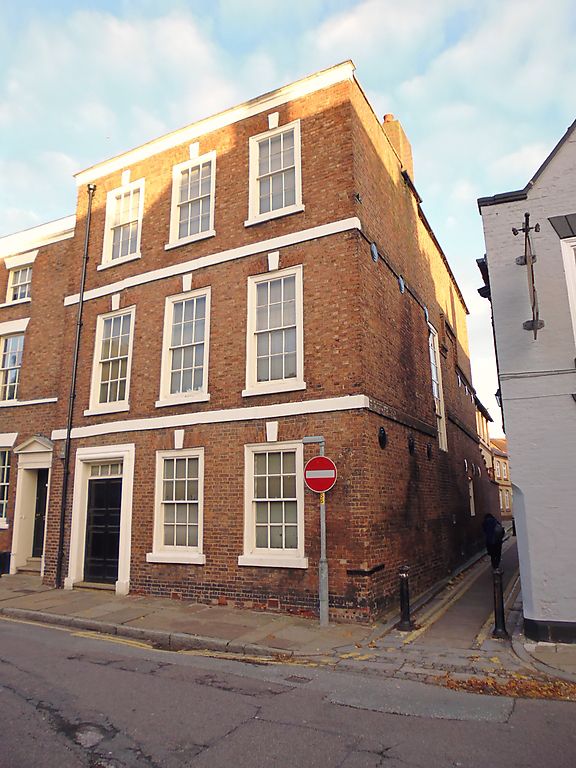 Town house, now displayed as such by the Grosvenor Museum. Mid
to late C18. Brown brick in Flemish bond to front and, older,
in English bond and irregular bond to east side and rear;
hipped grey slate roof, ridge at right angle to front.
EXTERIOR: 3 storeys, 3 bays. Stone step to door of 2 short
panels, 2 long panels, 2 short panels and 2 long panels with
4-pane overlight in bolection case of painted stone; 2 flush
12-pane sashes east of door. Painted stone second storey
floorband; three 12-pane flush sashes. Third storey floor
band; three 12-pane flush sashes. All sashes have painted
stone sills and gauged brick flat arches with projecting
keystones. Cast-iron rainwater pipe, west; painted stone
frieze and cornice; a lateral chimney on each side.
The east side has an unbroken vertical joint 5m back, by the
chimney. The brickwork behind the joint is older than the
front; floorbands towards front of 3-course brick, towards the
rear a higher band to the second storey and a C17 band of
1-course, a band of console-shaped corbel-bricks and 2
oversailing courses; a tall, nearly-flush stair sash of 21
panes with cambered head and no sill cuts the bands; a blocked
window to each storey, with the third storey floorband raised
above the head of the former second storey window; an inserted
nearly flush 16-pane sash to first storey. The first storey
and second storey floorband of the rear are rendered; the
second and third storey each has two 12-pane flush sashes; the
third storey floorband carried through from the east side; a
casement of two 8-pane lights in gable to attic. The windows
have no sills; the sashes have gauged-brick heads.
INTERIOR: steps down branch to front and rear cellars, the
former barrel-vaulted and with a brick chute from Castle
Street. The surfaces of both cellars are covered with
waterproof render. The first storey front room has doors of 6
fielded panels from hall and stair hall; full panelling with
one row beneath dado rail and a tall row above; cast-iron
grate; cornice. The hall and stair hall have patterned tile