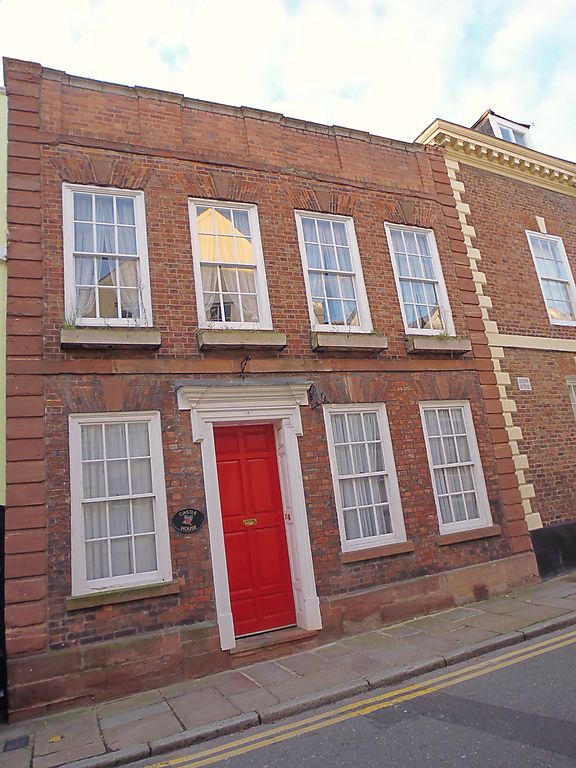 Town house. Mid C18 front and stair and late C16 core. Flemish
bond brown brick; grey slate roofs, with single pitch sloping
away from facade and a lower, long rear wing having ridge at
right angle to front.
EXTERIOR: 2 storeys, 4 windows. Sandstone plinth; stone step
to door of 2 short, 2 long, 2 long and 2 short panels, all
fielded, in eared architrave with frieze and moulded cornice.
banded quoins with all stones of the same width. Second storey
floorband of stone. Nearly flush sashes of 12 panes have stone
sills and flat gauged brick arches with keystones, one east of
door, 2 west of door and 4 to the second storey. Stone band
beneath brick parapet with coved stone cornice.
The rear wing is rendered, and windows renewed.
INTERIOR: the cellar has a barrel-vault, probably early C18,
of small bricks on sandstone walls to front and sides; a rear
extension is blocked. The front door is on HL hinges; door of
4 fielded panels to rear wing; 2 lambs-tongue-stopped
chamfered cross-beams. The front west room has panelled
embrasures with benches. The first room in the rear wing has 2
oak cross-beams carrying a stop-chamfered joist; cross-beams
visible in passage and a large oak cross-beam in the rear
room.
A fine open-well oak stair of 3 flights has curtail, rose, 3
balusters of spiral-moulded column-on-vase to each step. The
front room east of the second storey has part of the east
truss C15 or older with post of tie-beam, arched brace,
cambered collar and wattle-and-daub panels between light
posts. The west bedroom has panelled embrasures; the room
immediately behind has a probably Elizabethan stone fireplace,
the frieze having 3 heraldic shields, 2 Tudor roses and 3
lozenge-shaped flowers; the plaster overmantel of 3 panels has
the AD 1400-1603 royal arms, probably Elizabethan. The ceiling
of 2 panels has reeded edges; some timber framing is visible.
The middle bedroom has purlins with angled windbrace.