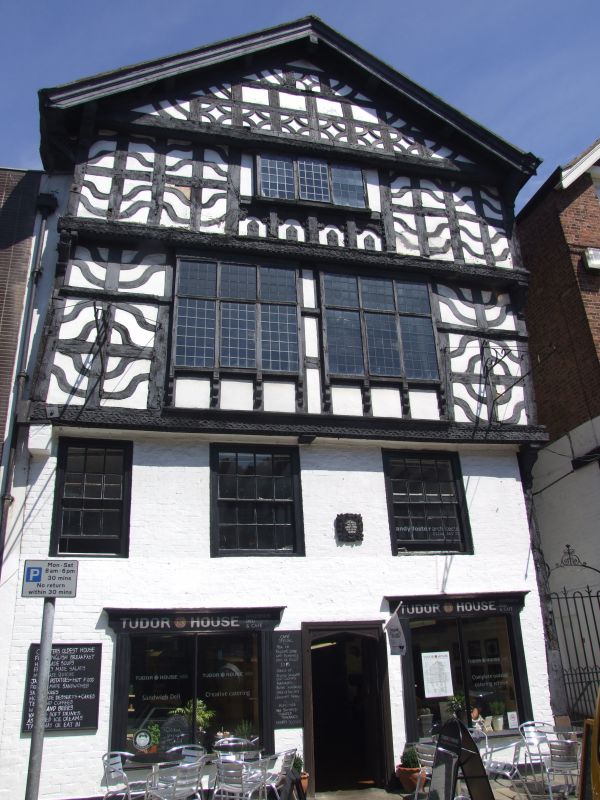 Undercroft and town house, now shop and town house. Probably
1603 extended to rear early-mid C17 and altered in detail C18
and later. Sandstone, brick and timber framing with plaster
panels; grey slate roof with ridge at right angle to front.
EXTERIOR: 4 storeys plus cellar. The lower 2 storeys are brick
to the front, but with an oak corner-post. The shopfront of
painted brick has an oak door in Tudor-arched case with a C19
2-pane shop window to each side with head-boards inscribed
TUDOR: HOUSE. Erroneous date-plaque "1503" above the door. The
second storey has flush sashes, one of 12 panes, north, and 2
of 16 panes. Jetty-beam with strapwork-carved fascia on 4
brackets, one renewed; central beam-end. The third storey has
two 3-light mullioned and transomed leaded casements set proud
of the wall-face; 3 small panels to each window and a narrow
panel between them; the 2-panel width with 2 intermediate
rails between windows and corners have S-shaped braces in a
centralised pattern. Fourth storey jetty similar to third
storey; the 3-light mullioned leaded casement has 4 arched and
decorated panels beneath and 2 rows of 4 panels with S-shaped
braces to each side. The jettied small-framed gable has
convex-lozenge and curved braces above a dentilled bressumer
on shaped end-brackets; replaced bargeboards.
The south side, Hawarden Castle Entry, slopes up sharply; the
lower part of the wall, probably early C17 workmanship, is
sandstone rubble. Posts survive in the brick walling of the
second storey; the lower rear wing is framed independently;
small framing to third and fourth storeys; a blocked casement
with closely-spaced lozenge-section mullions by the front
corner of the 4th storey. The rear gable of the main block is
pebbledashed; the rear of the rear wing small-framed. A south
lateral chimney. The timber frame of the south side was
reconstructed 1973-4.
INTERIOR: the cellar, in east part of south bay, is rock-cut
with sump in middle, stone steps south west and earlier steps
to blocked entrance, west; brick barrel-vault, C18. The

undercroft has a central wall, front to back, with openings.
The north bay has a cross-beam 270mm x 270mm and a damaged
cross-beam 280mm by 260mm; joists. The south bay has beams,
joists and replaced stair; replaced fireplace against south
wall; the west beam of the fourth bay east is probably
continuous with the corresponding beam, 280mm by 260mm, in the
north bay. The storey is much repaired, but not altered in
plan.
The Row was enclosed 1728 by Roger Ormes, now forming 2 rooms.
The north room is plastered. The south room has dado rail and
plain oak joists from front to back; door and window positions
in framed east wall show pattern before Row enclosed, now
giving borrowed light through leaded panes to room behind,
which has a stop-chamfered beam from front to back, a
stop-chamfered post and small-panelling to north wall. The
back room has an open fireplace with carved fascia brought in,
6-panel oak doors of C17 type and a chamfered beam from front
to back, stopped to front. Balusters to the stair are altered,
but barleysugar balusters to the landing are visible also from
undercroft. The stair to the third storey in a closed well has
shaped splat balusters to the landing. The good front chamber
has full small-panelling of oak, oak embrasure-benches, a
3-panel plaster ceiling divided by 2 cross-beams, each panel
having cornice, 3 varied plaster roses, and small uniform
corner-decorations; a post supports the centre of the rear
cross-beam; a large brick fireplace with an oak Corinthian
pilaster to each side. Behind the chamber a small bedroom with
timber-framed walls has wattle-and-daub; a rebuilt brick
fireplace in the south-west corner and a reeded ceiling
cornice; leaded casement. The back room has some timber
framing visible. The oak stair to the fourth storey, probably
re-positioned, has shaped splat baluster. The roof-structure
of the rear room of the third storey, with independent front
truss, shows clearly that the rear wing was added. The fourth
storey has 2 rooms. The front room displays the gable truss
and an inner truss against it. The central truss has 5 struts
to the principal rafters; the east truss has a central post
and 2 curved struts; windbraced trenched purlins.
Dendro-dating of the timbers has confirmed the early C17
dating.
(Chester Rows Research Project: Grenville J: Lower Bridge
Street, East: 1988-).