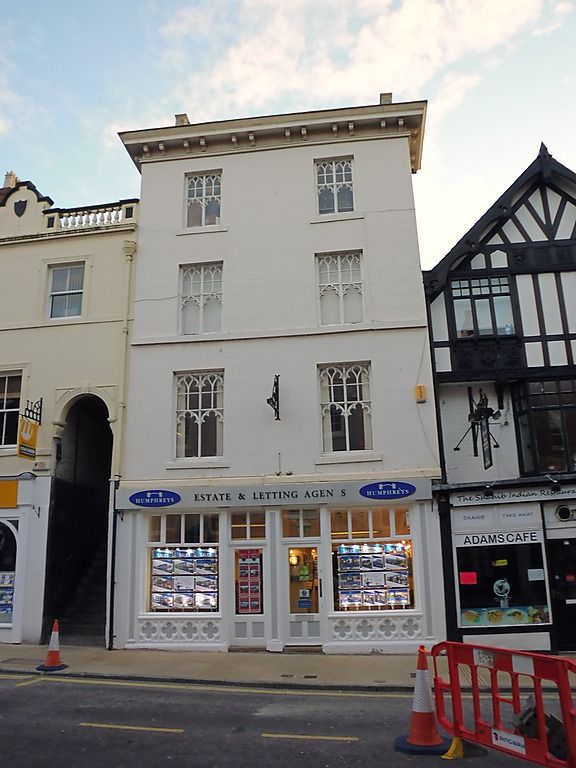 2-bay undercroft and town house, now 2 shops and town houses.
The shops containing probably late medieval elements of the
undercrofts, the upper storeys rebuilt early to mid C19 and
altered 1970s. Lined render on brick; grey slate roof, altered
to rear.
EXTERIOR: 4 storeys, 2 bays. Handed shopfronts with
part-glazed doors and shop-windows above stallrisers with rows
of quatrefoils; central, intermediate and end pilasters and
simple fascias. Each upper storey has 2 Gothick windows
proportioned as Georgian sashes but containing fixed lights
and casements with cusped-arch glazing bars; painted sills,
probably of stone, to the second storey and fourth storey;
sillband to third storey. The boldly-projecting boxed cornice
on brackets and the lateral chimneys are in Italianate manner.
INTERIOR: at street level a central party wall divides the 2
shops, probably on the line of a former arcade of posts
between the bays of the undercroft; the spacing of the
cross-beams of heavy section is the same in both shops; some
cornices; the walls are clad. The second storey, with access
via steps to No.11A Lower Bridge Street (qv), has the
stallboard of the former Row enclosed and the Row walk
preserved as Unity Passage. The enclosure of the Row
stallboard to form a chamber appears to be early C19, but in
1894 JR Crawford proposed to build cottages to the rear, and
renamed the rear courtyard, formerly Rock Court, Unity Place;
he had No.49 Bridge Street Row (qv) and rebuilt No.21 Lower
Bridge Street in 1895 (not included).
The former Row storey and the third and fourth storeys could
not be inspected, but on cursory inspection in 1988 are stated
to have revealed no features of special interest.
(Chester Rows Research Project: Grenville J: Lower Bridge
Street East: 1988-; Improvement Committee Minutes: Chester
City Council: 1/8/1894).