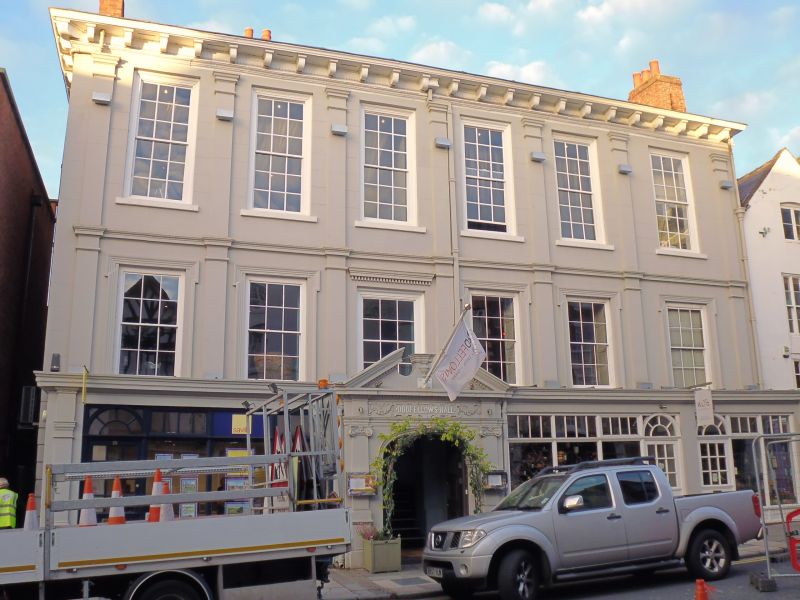 Town house, then a school, now club, offices and shops. 1676
altered 1678 for Lady Mary Calveley, occupied early C18 by
John Williams, Attorney General of Denbighshire and
Montgomeryshire from 1702 and Cheshire and Flintshire in 1727,
access altered late C19, the north bay added C19 and the first
storey of the front projected to include shops late C19. Brown
brick in irregular bond, rendered to the front; hipped grey
slate roof, belled towards eaves, rises to a central
rectangular flat roof, with formerly symmetrically placed
lateral chimneys.
EXTERIOR: 3 storeys of 5, then 6, bays. The first storey, in
C19 manner, has projecting porch to third bay from south with
basket arch under broken pediment with egg-and-dart moulding,
with a bulgy pilaster to each side;; ODDFELLOWS HALL in raised
capitals on the frieze. A projecting shopfront south of porch
has a small-pane part-glazed door and a 3-light transomed shop
window; 2 similar shopfronts north of the porch with a 3-light
window and a 2-light window.
The second storey has 6 bays, the added north bay being wider,
with 7 pilasters, capitals coinciding with the third storey
floor-string. 2 nearly flush 12-pane sashes in eared
architraves south of entrance bay and 3 similar sashes north.
The entrance bay has a shorter sash of 12 square panes in
place of the former front door; before the north bay was
added, the front was symmetrical with a pair of quadrant
external stairs to the entrance. The third storey has 7
pilasters and 6 tall nearly flush 18-pane sashes. A bold
cornice on painted stone brackets.
The south side has lowest storey rendered with brown brickwork
above; a blocked doorway has stone step. The second storey has
a flush 12-pane unequal sash; the second-to-third storey
half-landing has an 8;18;8 pane Palladian window in a stone
case. Flush sandstone quoins at the south-west corner;
sandstone plinth and flush bands to part of south wall;

cornice as to the front.
The rear best displays the character of a substantial late C17
town house, with symmetrical elevation of 2 storeys, the
ground level one storey above the front pavement level,
between flush quoins at both former corners. 5 nearly flush
sashes under gauged brick heads to the lower storey and 5 tall
18-pane sashes to the upper storey; cornice as to front; the
added northern bay has a matching sixth sash to each storey
and a lean-to roof with plain flush verge. The north side is
built against.
INTERIOR: the entrance bay has inserted stair in
plaster-panelled well to the second-storey stair-hall. A
bolection-panelled door, now blocked, in each side wall above
the stair gave access to the south and north front rooms. Good
panelled doors in panelled cases, probably of oak, to major
rooms. The front rooms have dado rails and panelling probably
of oak, now painted, shuttered embrasures and cornices. The
assembly room to the rear, the former garden front, has piers
and beam to former folding doors. The south part has
panelling, one row beneath dado rail and a tall row above, of
oak, marble fireplace and oak overmantel against the south
wall: the fireplace has panelled pilasters and frieze with
central cartouche of 2 foxes rampant on a shield; the
overmantel has swags and a Liver-bird cartouche. The north
part has panelled dado, a marble fireplace against the north
wall in an oak surround and a moulded plaster ceiling of 3
panels; cornices; all panels fielded, with bolection moulds.
The stair hall has panelled dado, plaster panels above stair
dado and oak panels to hall. The oak open-well closed-string
stair has square newels, 2 massive vase balusters per step and
moulded oak rail. The Palladian stair window has Ionic columns
and entablatures to the side-lights. The third storey landing
is panelled and has an incorrect triglyph frieze and dentil
cornice. The rear room has probably Regency fireplace against
the south wall and C18 fireplace against the north wall,
shuttered embrasures and dentil cornice. The front rooms have
panelled dados, panelled embrasures and moulded cornices.
HISTORICAL NOTE: an engraving by Batenham, drawn c1816, shows
the pair of external stairs of 1678, the first storey
expressed as a stone or rendered plinth, the front 5-bay,
symmetrical, the plain pilasters and face of the second and
third storeys brick with stone floorbands, gauged brick heads
to the second storey windows and 2 hipped front-roof gables.
The O.S. 1:500 plan surveyed 1872 shows the present sixth bay,
but also the external stairs and no projecting shops.
(Chester Rows Research Project: Grenville J: Lower Bridge
Street West: 1988-; Batenham: Engravings of Chester: 1816-;
Ordnance Survey 1:500 Plans, First Edition: Chester: 1872-).