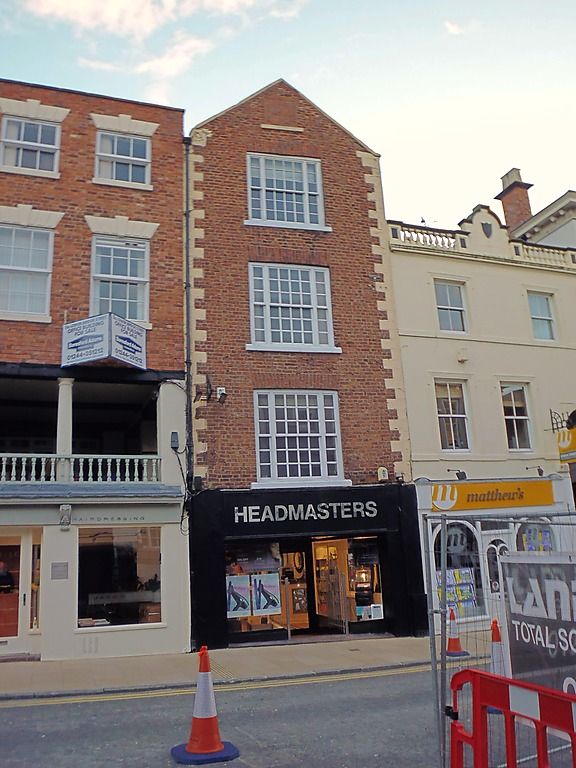 Undercroft and town house, now shop and museum. Undercroft
probably partly C14 altered C18 and C19; frontage probably
late C17; interior from Row storey upward probably late C17,
altered C18 and later. Coursed sandstone and brick undercroft;
irregularly bonded brown brick front; grey slate roof, ridge
parallel with front, rear portion altered.
EXTERIOR: 4 storeys of one bay. Modern plate glass shopfront
with end piers and fascia rendered. The upper storeys have
flush piers of painted stone. One tripartite sash of 6;24;6
square panes to each upper storey with painted stone sills and
gauged brick heads; a small blocked opening 10 courses high to
attic; the gable parapet has a plain painted stone coping; a
lateral chimney, south.
The rear has a narrow rear wing, north, overlapped by a
full-width outshut; a flush 12-pane sash to the third storey
and a replaced window to the fourth storey of the main block,
both with cambered brick heads.
INTERIOR: at street level there are portions of medieval
stonework of the undercrofts, repaired and altered in brick
C18 and C20. Three sections are visible in No.15: the front
portion of four bays is of brick with timber beams; the north
and south walls of the central section have portions of
medieval stonework, repaired and altered in brick; the rear
portion has stone north and south walls repaired in brick,
with 2 medieval cupboard recesses in the south wall, and a
sandstone east wall with evidence of a medieval rear access
stair. The front room at former Row level has a panelled
embrasure; stair of one flight with winders at bottom has
square newel, closed string, 2 substantial barleysugar
balusters per step and a heavy moulded rail; the rear room has
a stop-chamfered oak beam and a fireplace with carved oak
surround brought in from the former Blue Post Inn. The
panelled third storey front room has one square row beneath
the dado rail and a tall row of panels above it, a chamfered
oak cross-beam, a possibly replaced fireplace with eared
architrave in a corner breast, a door of 2 long, 2 short and 2
long panels in the north wall and a door of 6 fielded panels
from the landing. The second room has a blocked corner flue
and 2 stop-chamfered oak cross-beams crossing also the
later-partitioned landing. The third room has door of 4

panels, the upper 2 with stop-chamfered arrises. The fourth
storey has stout oak beams, some repaired; the cross-beam in
the front room has lambs tongue stops and mortices for joists
in its upper arrises; a corner flue.
(Chester Rows Research Project: Grenville J: Lower Bridge
Street, East: 1988-).