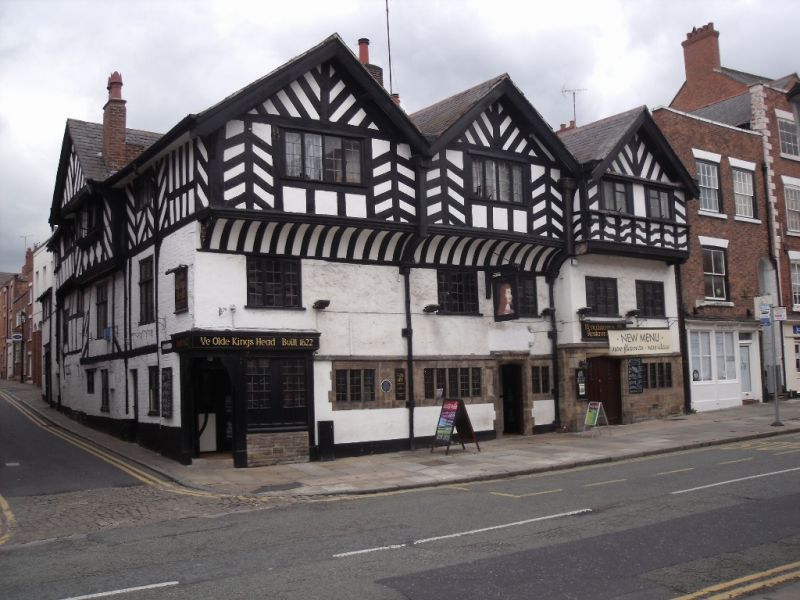 Town house with undercroft at street level, now hotel. c1208
for Peter the Clerk, rebuilt from former Row level upward and
refronted probably in part C15 and C16 and early C17 for
Randle Holme I, first of four generations of heralds and
armorial painters; heavily renovated 1935. Yellow sandstone,
timber frame with plaster panels, render and painted
brickwork; grey slate roofs.
EXTERIOR: 3 storeys, of 3 bays to Lower Bridge Street and 3
bays plus outshuts to Castle Street, south.
To Lower Bridge Street the former undercroft storey is refaced
in sandstone with framed and boarded Tudor-arched oak door in
canted recessed south-east corner having 2-light leaded window
to porch; the rest of the south bay and the centre bay are
rendered, with small mullioned leaded casements in stone
panel; framed and boarded Tudor-arched oak door; the north bay
projects, with Tudor-arched double doors and a 5-light
mullioned window in replaced stonework. The second storey is
rendered; 3-light oak-mullioned leaded casements, one to south
bay, 2 to centre bay and 2 to north bay. A bold coved jetty to
the third storey of south and central bays; a 4-light leaded
casement with small-framed apron and 2 panels of herringbone
strutting to each side, in each of those bays. The north bay
has 7 small-framed panels with wavy braces and a boldly
projecting sill on shaped brackets beneath a pair of 2-light
leaded casements. The 3 gables have plain ties to south and
central bays and projecting tie to north bay; herringbone
strutting; replaced bargeboards. The whole front was largely
reconstructed in 1935.
The repaired south face to Castle Street has stonework of
probably early C13 origin to the west bay. The central and
east bays are of painted brick, with a damaged bay-post;
miscellaneous openings. The second storey has the floor-beam
to the central and east bays and a lighter, higher rail to the
west bay; former Row post in the east bay, bay-posts 2

intermediate posts and struts in the central bay and
small-framing to the west bay, all brick-nogged. The third
storey has herringbone struts and a little close-studding in
the east bay with an intermediate rail and a 3-light leaded
casement. The jettied central bay has a pair of leaded oriels
with aprons of 3 quatrefoil panels; herringbone panels to each
side beneath a jettied herringbone-strutted gable with
replaced bargeboards and a replaced chimney at the east
corner. The small-framed west bay is jettied, with two 3-light
leaded casements. The one-bay flush rear wing of painted brick
has cellar door, a leaded casement to the second storey and 2
to the third storey. A 2-storey outshut, formerly stables, has
replaced carriage doors and small-pane casements.
INTERIOR: the public rooms only were inspected; notes on other
parts of the building rely on the Rows Research Project
inspection in 1990. The cellars behind the range facing Lower
Bridge Street contain medieval stone walls, probably early
C13, but much altered later; they now form an irregular group
of small rooms, but appear always to have been sub-divided,
unlike other Chester undercrofts. The timber-framed former
undercroft, now first storey, to Lower Bridge Street has a row
of 7 samson-posts parallel with the front with jowled tops
carrying a longitudinal bridging beam, arch-braced, formerly
with such braces also to front and back. The former Row
storey, now second storey, has framing integral with that to
the undercroft, including the samson-post arcade, with
bridging beams and joists. Evidence of the former Row is in
mortices, now empty. The present structure indicates a former
plan with a range of small chambers, probably shops, between
the Row and a parallel, single-storey hall-like main chamber.
The third storey framing appears to be integral with that of
the former Row storey and undercroft beneath. The former
floor-plan and means of access are not yet established.
(Chester Rows Research Project: Grenville J: Lower Bridge
Street, West: 1990-; Bartholomew City Guides: Harris B:
Chester: Edinburgh: 1979-: 138-9).