Number 63 and 65 Street the Blue Bell 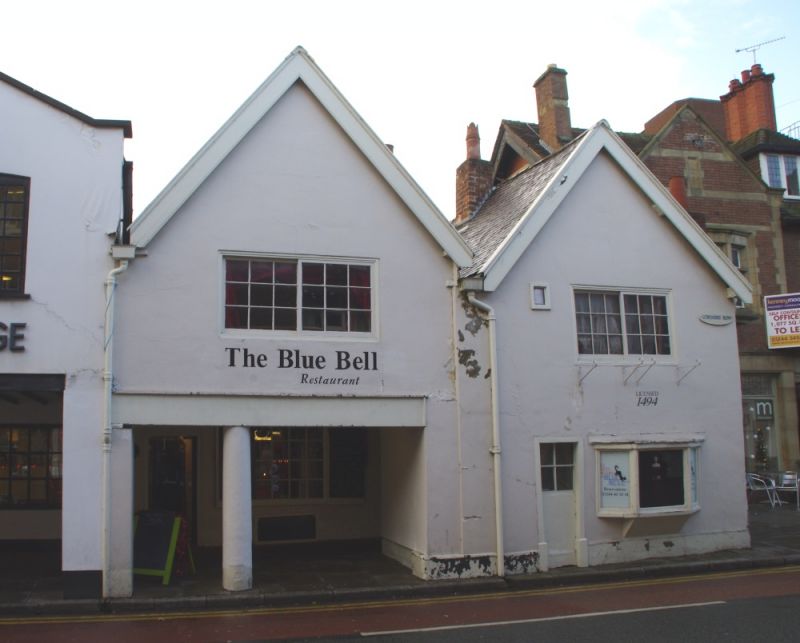 2 shops and town houses; mid to late C15; No.63 was for long
the Blue Bell Public House and since the early C19 No.65 was a
shop; the tenements are now joined as a restaurant. Timber
frames, sandstone and later brickwork, the front now rendered
and the side painted; grey slate roofs.
EXTERIOR: 2 storeys, plus cellars. The frames of the 2 houses
are separate, under parallel roofs with ridges at right angles
to the street; the narrow space between is now occupied by
stairs and lobbies joining the buildings.
2 gables to front. No.63 has open front to the street, a
painted brick pier to south and an octagonal painted stone
column south of centre with a plain stone cap; No.65 has a
stall enclosed as a booth between the street and the covered
pavement walkway, rendered to front and sides, with a small
canted 3-pane oriel to the street and brick with large framing
and a boarded door to the pavement. The face to the rear of
the pavement is largely painted brick with a framed 2-board
door to No.63 and a 4-board door to No.65; a replaced window
of 16 panes with 4-panel shutters to No.63, a small 1-pane
window at centre and a 4-pane sash with 6-panel shutter to
No.65. A replaced window of horizontal proportions in the
gable to No.63. Two valley chimneys, a chimney on the ridge of
No.65, one at the south-west corner of No.63 and a single-flue
chimney at the north-east corner of the front booth to No.65.
The north side of painted brick has replaced
horizontally-sliding sashes to the first storey, and to the
second storey a 4-pane casement and a flush 9-pane sash in a
half-dormer.
INTERIOR: the features of greatest interest are in No.63. The
cellar across the front has coursed rubble sandstone walls,
stone steps from rear in No.63 and timber ceiling structure;
No.63 has a later barrel-vaulted rear cellar. The side walls
of the first and second storeys were studded; some posts and
studs are exposed, and some chamfered beams and oak joists to
the first storey. Some large framing to both storeys of the

front wall is visible. The north-east corner post in No.63 has
a later console. The broad fireplace in the north side of
No.63 has a sandstone back, old brick cheeks and an oak
bressumer. The late C17 newel stair has barleysugar turned
balusters to the first 3 steps and to the landing; a 3-board
oak door near the stair-head has 2 planted panels on its outer
face and battens on its inner face; painted stone mantelpiece
to blocked south-west corner fireplace.
The adjacent roof structures at eaves level, with rafter-ends
of the roof of No.65, and the former gap between the 2 houses
are exposed near the rear of No.63, and less clearly near the
front. The wall-plates are visible; the gable tie-beams,
curiously, are also jointed to the corner-posts like
wallplates. No.63 has 2 truss-posts on each side. The first
internal truss, formerly the central truss of the solar, has a
shaped octagonal crown-post braced from the cambered tie-beam
and to the principal rafters and the crown-purlin; the truss
at the back of the former solar is undecorated, with square
post braced from the cambered tie-beam and to the crown
purlin; the third internal truss, formerly between chamber and
hall, is similar but with tie-beam less cambered. The trusses
over No.65, less visible, are undecorated.
This property includes the best example, other than in the
Rows, of a medieval town house in Chester.
(Harris R: Chester Rows Research Project: 1989-).