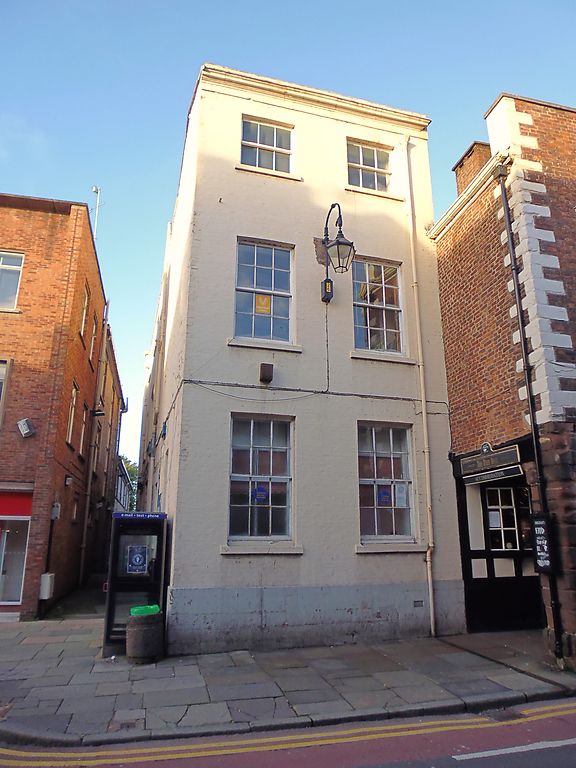 Town house, now offices. 1788, altered. For James Folliott.
Brick, painted to Northgate Street and south side; grey slate
roof.
EXTERIOR: 3 storeys. Painted stone plinth; painted stone
sills; gauged brick window heads; sashes are recessed. The
face to Northgate Street has 2 sashes to each storey, of 12
panes to the first and second storey and 6 panes to the third
storey; a moulded parapet cornice. The south face, to a narrow
alley, contains the entrances: the first storey has 2 replaced
2-pane sashes, a door of 5 fielded panels with a simple
horseshoe-shaped radial-bar fanlight above, a tripartite sash
of 4;12;4 panes, 3 apron steps of stone to a door of 6 fielded
panels with a reeded middle stile and a cast-iron radial-bar
overlight in a pedimented painted stone doorcase with
sidelights, 2 small replaced casements and a sash opening
blocked in brick; the second storey has a replaced 2-pane
sash, a tripartite sash of 4;12;4 panes and a 12-pane sash;
the third storey has three 6-pane sashes; there is a Georgian
rainwater head and old down-pipe. The rear has two 12-pane
sashes to each of the lower 2 storeys and 2 smaller 20-pane
cross windows in reduced openings to the third storey; a flush
gable.
INTERIOR: deep full-length cellars include a substantial
cast-iron range, probably late C19, "The Heald" model, and a
wine cellar with bins.
The first storey rear room is sub-divided but retains
sub-panels and shutters to windows, some panelling below
partly-removed dado-rail, a painted wood fireplace with fluted
pilasters and a Liver-bird with swags and a plaster ceiling
cornice; east of the entrance hall a broad archway of timber
with panelled jambs is partly covered; the middle room has
sub-panels and shutters to the triple sash; the front room is
divided, with false ceilings and detail covered. The
substantial open-well stair has open strings with brackets,
turned vase newels, 2 turned balusters per step and curved
landings against the south wall; a full-height corner-post, in

keeping, is late 1980s. In the second storey the rear room has
panelling to the dado rail, shutters to sashes, a plain white
marble fireplace and a plaster cornice; the middle room has
sub-panels to the triple sash, a simple wood fire surround, a
simple plaster cornice and, now blocked but visible from the
inserted lavatories adjoining, double 3-panel doors; the front
room has sub-panels and shutters to windows, a replaced
fireplace and a simple plaster cornice. The third storey rear
room has double 2-panel cupboard doors. Surfaces, where
visible, are softwood.
The house is narrow and deep. The principal room of each
storey is to the rear, overlooking a now lost garden. A
blocked 6-panel door in the east wall of the second storey
rear room suggests that the stair has been reversed; most
doors have been replaced.