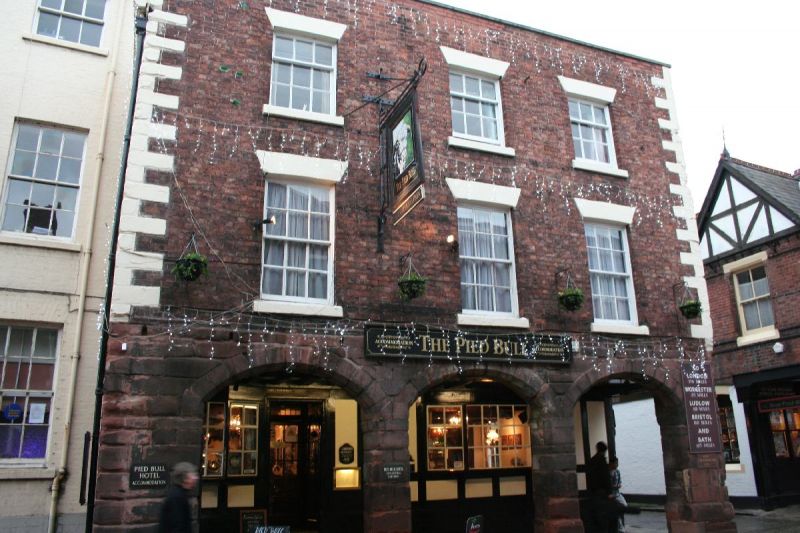 Inn, probably on the site of 2 medieval tenements. C17 partly
refronted later C17 and extended to rear C19. Brown brick with
some sandstone and timber framing; grey slate roofs with 2
parallel ridges running back from the street.
EXTERIOR: cellars and 3 storeys. Arcade over Northgate Street
pavement has 3 segmental arches of stone with 2 storeys of
Flemish bond brickwork above. The rebuilt timber-framed rear
face to arcade has a broad C17 door of 4 oak boards with a
planted round-arched panel-frame, on wrought-iron strap
hinges; a replaced slightly bayed small-pane window to each
side of door; flush sandstone quoins at north corner to King
Street. The upper storeys have flush quoins, 2 recessed sashes
of 12 panes to the second storey and 2 of 9 panes to the third
storey; painted stone sills and wedge lintels; parapet with
plain stone coping.
The north side, to King Street, of irregular bond brickwork,
has a 3-course band on shaped corbels of brick at each upper
floor level; the lower band is doubled above the former piers
between arches of window and door openings, now blocked or
reduced; the first storey has 3 old window arches and 2 door
openings, one broad and the other narrow; there are now 2
recessed 12-pane sashes with boxes exposed, 2 smaller inserted
small-pane windows and a 3-panel door with leaded glazing in
the upper panel in a plain doorcase with blocked overlight and
a small moulded hood on brackets. The second storey has two
12-pane flush sashes and a flush 9-pane sash under relieving
arches, and four inserted casements. The third storey has a
3-light casement with old leaded glazing in 2 upper panes, and
4 inserted casements; a flush lateral chimney.
The rear extension is of 3 builds: the first storey has the
blocked arch to a former carriage entrance, the second storey
a replaced cross window and the third storey a casement of two
4-pane lights; there are no visible features of special
interest further back.
INTERIOR: the full cellars have outer walls of coursed
sandstone with some later brick patching; sub-division of the

interior is largely modern, but walls and openings incorporate
chamfered oak beams, one cambered and with its lower face cut
into to increase headroom, and oak posts with some chamfers
and one with a jowelled head.
Much of the first storey is altered and features are masked.
The front room, north, has a C17 stone fireplace with moulded
reveals, slots perhaps to hold former spit arms, a brick flue
and an armorial painting on the overmantel; the front part of
the room has small panelling of oak, altered, in which are 2
cupboards by the fireplace, on butterfly hinges.
The C17 oak stair is open-well to the second storey and was so
to the third storey, but altered to a dogleg; it has carved
faces to the closed strings, shaped newels and pierced vase
splat balusters; the steps are carpeted.
In the second storey the principal front room, north, has 4
rows of narrow oak panels surmounted by a broad row, parts
altered. The open fireplace with sandstone and brick flue has
a painted stone chimney-piece with moulded reveals, a
depressed arch and 2 superimposed cornices, the lower one on
consoles and the upper on bulgy rectangular corbels; moulded
ceiling cornice of oak; 2 tongued stop-chamfered beams, three
plaster roses; a foliage-and acorn motif at each corner of the
plaster ceiling. The front room, south, has a south-east
corner flue, with replaced fireplace, a plastered chamfered
ceiling beam and a plaster fleur-de-lys at each corner of the
ceiling panels. Each front room has an oak door of 6 panels.
There is some original oak panelling in the landing and rear
passage and, on the division line between the 2 former
tenements, oak framing with full-height panels, perhaps C16.
The third storey has a little large framing, now concealed, in
the south bay, some visible beams and posts, exposed oak
joists and a corner flue in the south front room.
HISTORICAL NOTE: the Pied Bull is almost certainly the inn
where George Borrow admired the strapping chambermaid,
commented on the ale and spat the proffered Cheshire Cheese
into the street.
(Borrow George: Wild Wales: 1862-).