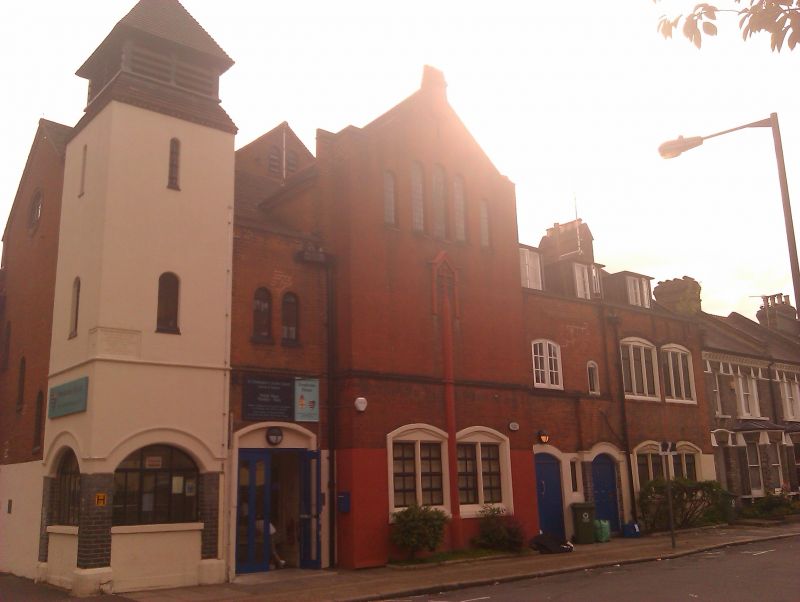 PLAN: church with club rooms, kitchens and WCs to ground floor of corner plot and return to Huntsman Street.

EXTERIOR: the domestic ranges to Tatum Street, including No. 80, have two storeys with dormers and an almost scattered fenestration; three roof dormers; two segmental-arched entrances. The original glazing (Prior's patent glass in cast-iron casements) has been replaced in the two right-hand bays, ground and first floors. Casements of an authentic design to the rest and the dormers. Chancel range of church/club block has two windows to ground floor; the present entrance to the church and rooms is in a recessed range between the chancel and corner tower with its louvered bellcote, pyramidal roof and groin-vaulted corner entrance.

Transept range to return along Huntsman Street with stepped round-arched windows lighting vaulted stair to church on first floor. Three windows to ground floor of return. The church itself has nave and aisles of five bays, square-ended chancel and transept. Skylights now fill the position of the original shallow-pitched dormers.

The rear elevation to Halpin Place has an unusual canted front line and features a caretaker's house at the north of the block, this latter according to Prior's 1891 design.

Rainwater goods bearing the date 1908 are intact. A memorial plaque to the 1908 building campaign is set in the tower.

HISTORY: The Pembroke College Mission (Cambridge University), founded in 1885, appointed the architect, Edward Schroeder Prior in 1891 to build their London mission church. Only the ground floor of the 1891 design by Edward S Prior was executed; the warden's house to the rear in Halpin Place, with its unusual canted front wall, was completed to the original design soon after. All of No. 80 was added to Prior's designs of 1895. In 1899 on the death of the architect's brother, Charles Prior (who was a tutor at Pembroke and member of the mission committee) Prior lost the job as mission architect. The upper floors of the mission, including the first-floor church/hall, were completed by Herbert Passmore in 1908-9. Passmore followed Prior's plan, in the main, but simplified the massing and details considerably. The line and elevation of Prior's design is most irregular, reflecting his own theories of organic building and his idiosyncratic use of detail, in particular the unusual mullioned windows to the ground floor of the church and the mission house along Tatum Street.

REASONS FOR DESIGNATION:
The Church of St Christopher (former Pembroke College Mission), with No. 80 Tatum Street, is listed at Grade II for the following principal reasons:
* Architectural special interest: an unusual and interesting design by the prominent late C19 architect, Edward Prior, as completed by Herbert Passmore.
* Historical special interest: a rare and nearly intact survival of an 'Oxbridge' mission building from the late C19.