Obelisk at the Centre of St George's Circus 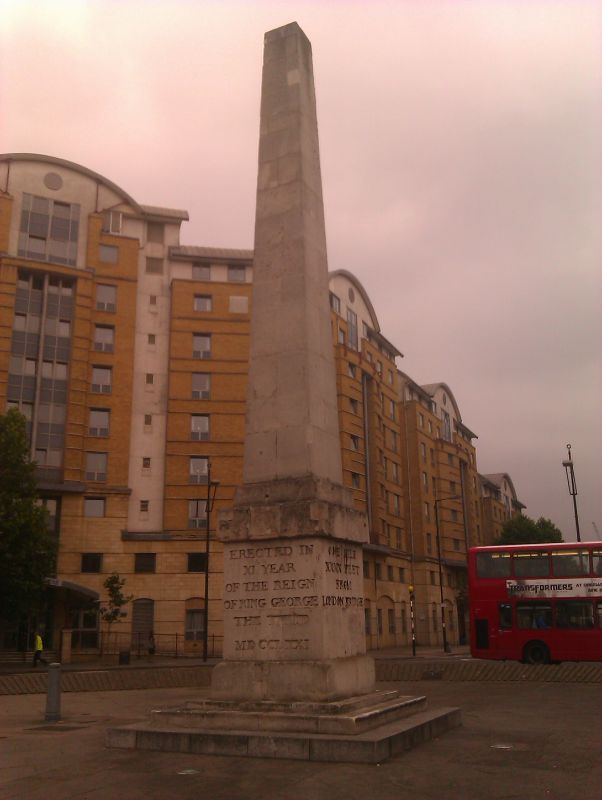 Entry Name: Obelisk at the Centre of St George's Circus

Obelisk. 1771. Robert Mylne. Stone. Removed from St George's
Circus in 1905.Inscribed as follows: north face: ERECTED IN XI YEAR OF
THE REIGN OF KING GEORGE THE THIRD. MDCCLXXI. THE RIGHT HONOURABLE
BRASS CROSBY ESQUIRE, LORD MAYOR. South face: ONE MILE, CCCL
FEET FROM FLEET STREET. Arms of the City of London below. East
face: ONE MILE FROM PALACE YARD, WESTMINSTER HALL. West face:
ONE MILE, XXXX FEET FROM LONDON BRIDGE.
HISTORY. this obelisk was erected in 1771 in the centre of St George's Circus as part of the grand planning scheme designed by Mylne for Blackfriars Bridge Road. It provided the focal point(and signpost) for the radiating roads leading to various parts of the city from the entrance from the south. In c1897 it was removed to make way for a Victoria Diamond Jubilee clock-tower and was re-erected in the Geraldine Mary Harmsworth Park on Lambeth Road where it was included in the List in 1950. In 1998 it was re-erected in its original position. The obelisk forms a significant group with the Duke of Clarence Public House no 32 London Road (qv), Nos 123-131 London Road (qv, Nos 113-119 Borough Road (qv and the former Presbyterian Chapel (qv) and St George the Martyr Library (qv), also Borough Road.