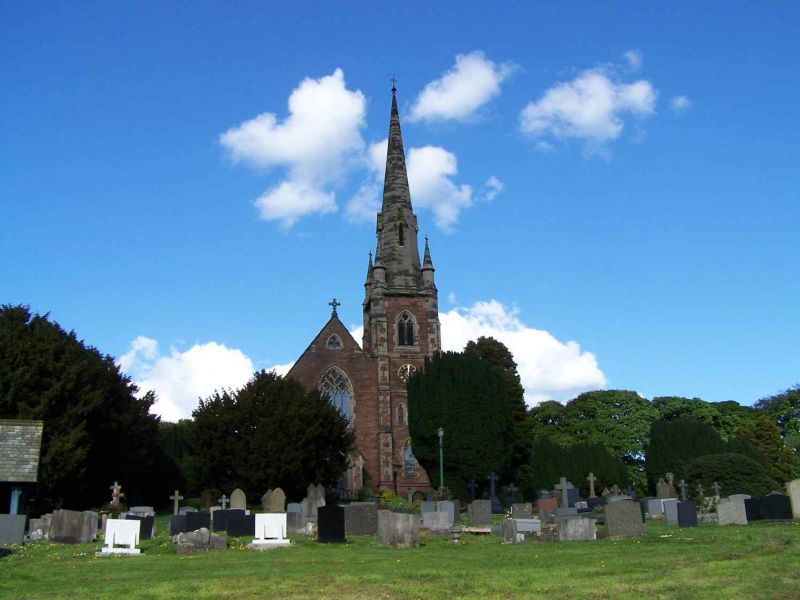 Parish church. Medieval site, entirely re-built by J. Lewis of Newcastle-
under-Lyme between 1868 and 1870. Pink sandstone, rough-faced coursed
rubble, graded slate roofs all with raised verges on kneelers and crosses
to the gables. Decorated style; nave, chancel, south-west tower with
spire, south aisle and chapel, north aisle with vestry, south and west
porches. South-west tower: in 3 stages with angle buttresses, crowned
by rather coarse corner pinnacles, Decorated-style windows to each stage;
tall, recessed spire with gabled lucarnes. Nave in 4 bays, twin trefoil-
headed windows to clerestory and plain corbel table; gabled porch at
west end. Chancel: in 3 bays, each window displaying a variety of Gothic
tracery (for example, mouchettes in the east window on the south side);
corbel table. Aisles: of lean-to construction, each in 4 bays; 2-light
trefoil headed windows with quatrefoils above, corbel tables; western
bay on south side with gabled porch. The south aisle has a separate,
lower chapel at its east end and at the east end of the north aisle is
the vestry. Interior: arch-braced roof to nave with V-struts to the
collars, panelled roof to chancel with principals resting on angels.
4-bay arcades to north and south aisles with octagonal capitals; tall,
pointed chancel arch. Good iron screen (c.1870) across the chancel arch.
All the other fittings and furnishings are of this (or later) date except
for. some re-assembled fragments of C14 stained glass in the west window
of the tower and the C18 coat-of-arms over the chancel arch. Monuments:
in a late C19 arched recess on the north side of the nave, William Sneyd
(died 1613) and wife, 2 recumbent alabaster effigies on a tomb chest with
armorial shields to the sides, the bottom parts of the former's legs are
missing; on north wall of the nave an elaborate monument to Radulph
Sneyd (died 1703) with carved brackets and mourning putti. Also 2 small
alabaster wall tablets to Thomas Sneide (died 1615) and Edward and Sisley
Brett (died 1593) on the south wall of the south aisle chapel and south
aisle respectively, the latter surrounded by heraldic shields; on the
north aisle wall a similar but undated slab to Lawrence Cranage.
Originally held by the Knights Templars, Keele was a chapel.-of-ease
of Wolstanton in the Middle Ages. The Victorian re-building was paid for
by Ralph Sneyd of Keele Hall. Graded II* on account of the completeness
of the Victorian interior, especially the stained glass by Clayton & Bell;
a church whose interior is better than its exterior, both aspects
reflecting High Victorian piety. B.0.E., p,158.'