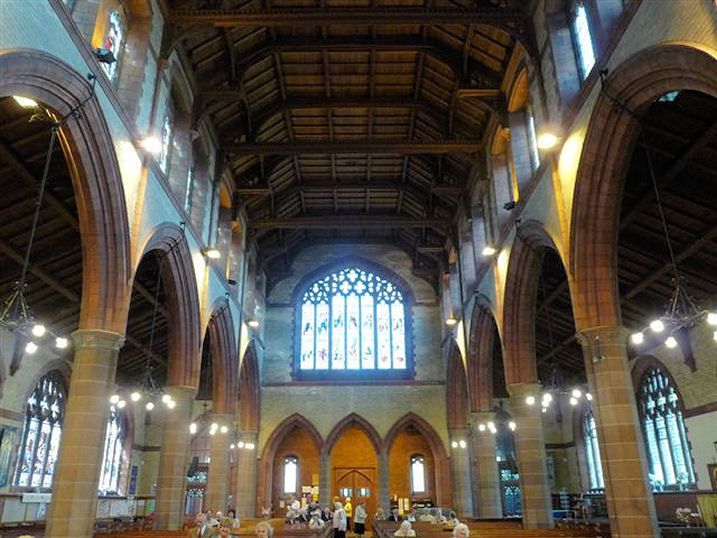 STYLE: Perpendicular.
PLAN: nave with west narthex, north and south aisles with south baptistery, coupled north and south transepts, crossing tower with transepts (choir vestry to north, war memorial chapel to south), short chancel.
EXTERIOR: the five-bay nave has a pilastered clerestory with pairs of square-headed two-light traceried windows, and a buttressed west gable which has a large Tudor-arched seven-light west window with tracery in the head, and a coped gable with traceried stone panel. Extending across the whole west end, the lean-to narthex, with buttresses, has a gabled south porch with a large moulded stone two-centred arched outer doorway protecting a segmental-headed inner doorway with Tudor flowers in the head (one lettered E). The aisles, with buttresses, parapets and large four-light windows with differing tracery, both have coupled transepts to the fourth and fifth bays and the south aisle also has a canted baptistery with lean-to porch in the angle with the transept. Transepts are buttressed and have tall traceried four-light windows, and the baptistery has three traceried one-light windows, a parapet carried round from the aisle and a steeply-pitched roof with a polygonal hip surmounted by a finial. The two-stage crossing tower has a small south-west vice, pairs of louvred and traceried two-light belfry windows, a moulded cornice with Tudor-flower enrichment and corner gargoyles, an embattled parapet with enriched panels and octagonal corner turrets, and a copper-clad fleche surmounted by a cross. Tower transepts have stepped triple windows. The chancel, of two very short bays, has tall two-light windows and a large five-light east window with tracery.
INTERIOR: lofty vessel with yellow brick walls, red sandstone dressings and arcades; octagonal columns with fillets carried up through the clerestory, moulded capitals with Tudor-flower ornament, arches moulded in three orders (and pendent wrought-iron candelabra); three-bay west arcade to narthex. Coffered wooden ceiling; choir and sanctuary with tiled floor raised in five steps; alabaster pulpit; carved octagonal font with carved pendent canopy.

HISTORY: Richard Bassnett Preston (1855-1934) had been JS Crowther’s pupil in Manchester and commenced independent practice in 1880, the partnership of Preston and Vaughan lasting until 1900. Crowther was commissioned to design the church of St Thomas in Leigh (List entry 1439679), for which fundraising began in 1885, but he died in 1893. Construction of that church did not begin until 1902, but it is very similar to the church of Emmanuel.
Forms group with No.47, Melton Grange (qv).