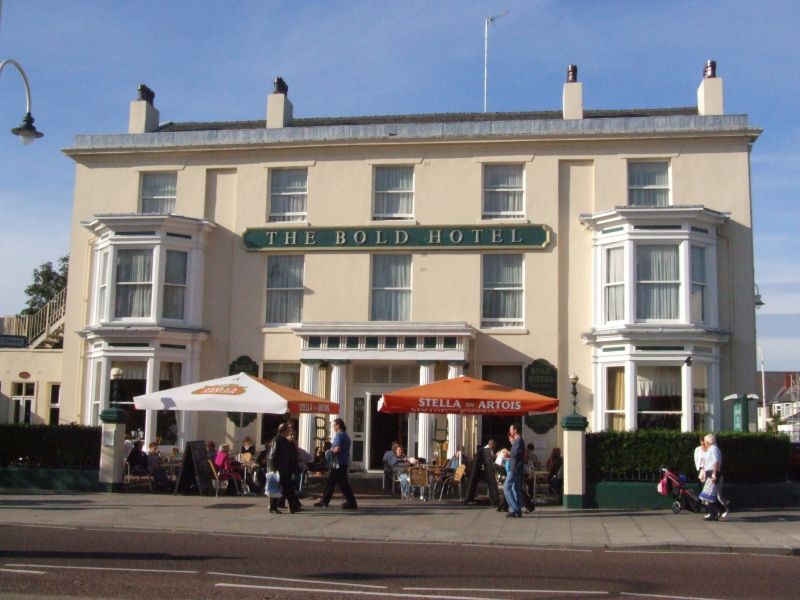 SOUTHPORT
LORD STREET (West side)
No. 583 The Bold Hotel

EXTERIOR: Three storeys and attics; five-window range. Symmetrical; with a plinth and a prominent moulded cornice with blocking course. The centre has a tetrastyle Doric porch with fluted columns and an entablature with triglyphs, guttae and moulded cornice; the outer bays have two-storey canted bay windows with panelled frieze and prominent dentilled cornice at each level; the other windows have raised sills and plain reveals, and all these windows are 1/1 horned sashes. Roof with coped gables and four chimneys on the front slope. Small single-storey flat-roofed addition to left. The right-hand return, to Seabank Road, has a round-headed doorway with console imposts and moulded head with raised lettering: LICENSED DEALER IN SPIRITUOUS LIQUORS. Over the first floor a very long panel with moulded surround and raised lettering: THE BOLD FAMILY HOTEL; and further to the rear a two-storey eight-window wing which has a moulded cornice on brackets over the ground floor and 2/2 sashes at first floor.